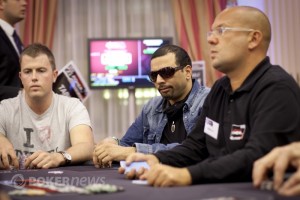 The Windy City Poker Championship has teamed with Tinley Park American Legion Post 615 and Shady Oaks Camp for the Spring Charity Poker Series (April 18-21) at the American Legion, with a televised $3K sit-n-go at Bettenhausen Fiat. Sixteen tournaments, including the popular “Joker’s Wild NL Hold’em” event, are scheduled for the four days with $10-$3K buy-ins.

The WCPC has drawn big-name players from all over the country in the past, including Jerry Yang, Faraz Jaka, Chad Brown, T.J. Cloutier and Bernard Lee. This year two world champs will play (Yang returning for the third time, and Chris Moneymaker).

The World Poker Tour Boot Camp will host its instructional camps during the WCPC spring events. On April 18, Yang will join Nick “Nicky Numbers” Brancato as an instructor for Day 1 of the tournament camp; Rick Fuller and Brancato will teach the cash-game camps April 20-21.

“There’s nothing more rewarding than seeing people who you’ve taught becoming successful,” said Brancato, the WPT Boot Camp director of training and 2010 WCPC Winner Take All champions. “I’m looking forward to playing against a few of these people in the upcoming WCPC. Just being able to be a part of that is a big honor, not to mention being able to support a great charity at the same time.”

“I’m so excited to be working with WCPC to bring WPT Boot Camp to Chicago,” camp director of operations Becca Joy said. “We have a full four days planned … full of learning, talking and playing all the poker you can handle, while supporting a great cause.”

The Ante Up Chicago Championship has become a marquee charity event at the WCPC. Started in 2009, the AUCC has been a popular tournament going into its fifth year. Buy-in is $250 for 15K in chips and 30-minute blinds (April 19, 7 p.m.).

More details can be found at windycitypokerchampionship.com or see the ad on Page 53 of our March issue.

PAR-A-DICE: This poker room recently started a bad beat, seeding its pool at $1K with quads over quads to win. When jackpot reaches $10K0 the qualifying hand becomes aces full of kings.