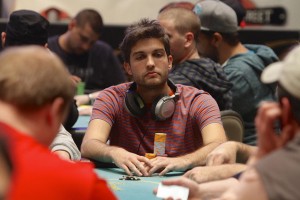 Vegas poker rooms constantly struggle to keep players coming through their doors. While some rooms always seem to be busy, others are not as fortunate. Sometimes a once busy room, because of a variety of factors, suddenly finds itself frustratingly quiet.

Sunset Station in Henderson is a room that’s not as busy as it once was. There are several rooms in the same southern Las Vegas area competing for the locals business.

New manager James Pedulla, the former manager of Caesars Palace’s poker room, and table games manager Dan Welch, are committed to returning the room to its former glory. When I met with them recently, they were proud to show off their room. They have eight modern tables, comfortably spaced. The room is conveniently near the sportsbook, food court, restrooms and the parking garage.

The room is beautiful, as is the casino, which offers dining options in all price ranges. Pedulla and Welch know their target customer is the local player, but they feel tourists have many reasons to give the casino a try. They believe their casino offers the Vegas visitor all the action and amenities that the Strip has to offer without the traffic and intensity. The hotel has more than 450 rooms, so there are always tourists available to join the locals.

There is a steady group of regulars who open the room with a $4-$8 limit game at 9 a.m. They would love to spread a $1-$2 no-limit game regularly, but it’s been a struggle. Pedulla and Welch want players to know they’ll spread any game there is interest in, any time.

Starting in March, the room is offering a new “Push the Pot” promotion. Every time a player wins a pot of $40 or more, they will be a given a ticket for the weekly drawing. Five times each Wednesday, between 4-8 p.m., a ticket will be drawn and the winner, if present and playing or on the waiting list, will be awarded $200. They tried this same promotion late last year and had much success with it, with the room especially busy for those Wednesday drawings.

They’re always considering new promos to bring people in, and are open to suggestions from players. They’re trying to get the word out to former regulars and newcomers that Sunset Station is a great option for their poker dollars.

Next up for Caesars is the Hoops and Hold’em Tournament that will run March 20-April 8 to coincide with March Madness. The $560 main event starts April 5.

HPO AT THE M: Penn Gaming’s Hollywood Poker Tour stopped at the M Resort on Jan. 25-27. All three events drew more than 180 players. Vegas local Charles Ambroghi took the $125 event for $5,445, then took second ($6,160) in the $225 event the next day, losing to another local, James Cudney, who earned $10,355. Ambroghi, who won more than $11,000 in two events in two days, was denied back-to-back victories when his pocket queens ran into Cudney’s runner-runner flush to end the tournament.

The $335 main event drew nearly 200 players. Two Vegas locals, Visnja Luetic and Romeo Samblero, chopped first place, surviving a final table that included World Series bracelet-holder Sam Stein. The two winners each took home $12,170 and a free entry into the HPO championship event at the M (June 28-30). That $2,500 event has a $500K guarantee. Luetic’s showing was especially surprising since she was playing in her first tournament.

VENETIAN: The Sands Poker Room is adding a “Deep Stack Extravaganza 3.5” to its schedule sometime in mid to late September. It will be about two weeks long, shorter than the four regular DSE events during the year.

NEW ROOM AT THE QUAD: The Quad is the new name of the former Imperial Palace. The Quad is still being renovated, but the poker room finally has a new, permanent home. After many months hidden upstairs, poker has returned to the main casino floor. The new five-table room is located near the front desk and the popular Hash House A Go Go restaurant.

The Quad has a new tournament schedule, offering $30 tournaments five times a day. It’s the same schedule that Bill’s Gambling Hall (a Caesars Entertainment property, as is the Quad) had before closing for a major renovation in early February.

LAUGHLIN NEWS: The Golden Nugget Laughlin has closed its poker room. However, it will still be offering its monthly “On the River Poker Series.” This series typically takes place the second weekend of the month, and has a $10,000 guarantee for the $80 buy-in. The next one will be March 9-10. John Colville, poker room manager for Golden Nugget Las Vegas said these events typically draw around 200 entrants.