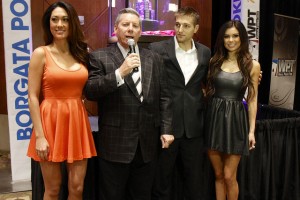 One of the most popular World Poker Tour events of the year is in Northern California at the Bay 101 Shooting Star in San Jose. This televised event brings professionals and amateurs from all over the world, dreaming of a WPT title and a massive payday. It also brings poker fans from all around to meet and get a photo with their favorite players.

The $7.5K main event runs March 4-8 and is unique in that there is a well-known poker “star” at each table with a $2.5K bounty on their heads for the player who knocks them out of the event.

Oh, and don’t forget about the one-of-a-kind autographed T-shirt that they’ll hand you after you rake in their last chips.

This adds extra incentive and gamble in otherwise relatively standard spots, which makes this one of the most unique WPT events on the schedule each year.

Last year’s final table included big names such as Joe Serock (third, $320K) and Erik Cajelais (fourth, $256K). In the end, however, local amateur Moon Kim came out on top, winning the title and $960K. Kim had won a $1K satellite to get into the main event and collected one bounty, knocking out professional Nam Le.

Bay 101 will run satellites ($250-$1K) up to the day of the main event. It will be a re-entry for those with deep enough pockets and the winner will receive a $25,500 entry into the WPT World Championship at Bellagio in Las Vegas on May 18.

There will be an extra $10K given to the chipleader at the end of Days 1 and 2 of the Shooting Star main event.

With all of the bounties and incentives in this tournament, it’s no wonder the Bay 101 Shooting Star is one of the most popular WPT events in the world.

— Garrett Roth is the Ante Up Ambassador for Northern California and the Where to Play editor. Email him at roth@anteupmagazine.com and follow him on Twitter @GarrettRoth.