AUPT: A look back at the Red Rock/Ante Up Magazine Challenge 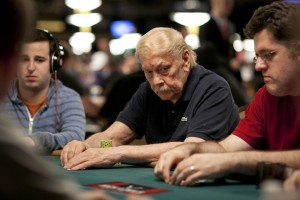 Dale Beaudoin and Ryan Lincks may be good friends, but when it comes to poker, they’re out to get each other.

“I moved out to Vegas a couple of years ago, and we met for the first time playing here at Red Rock and we talk strategy together,” Beaudoin said. “But it is kind of funny because people think that because you’re friends that you’re working together, but no way. Some of our biggest pots have been playing against each other.”

And one of those big pots played out heads-up at the final table of the Red Rock/Ante Up Magazine Poker Challenge Main Event at Red Rock Casino Resort Spa in Las Vegas in January, with Beaudoin coming out on top to nab his first victory in a $1,100 event, a personalized champion’s jacket and the cover photo on this issue of Ante Up Magazine as champion of the second Ante Up Poker Tour main event. Oh, and $20,875!

“Definitely the fact that me and one of my friends were playing heads-up is super cool,” Beaudoin said. “It’s cool to have success with a buddy.”

After deciding to chop the prize pool when they got down to heads-up, but leaving $2,000 and the magazine cover on the side to play for, Beaudoin had his work cut out in his quest to beat his friend. And when he got the big hand he needed to turn the tide, Lincks was quick to remind him just how lucky he was.

“(Lincks) had me 5-to-1 in chips and made a nice trap move on the button where he limped with pocket 7s, and he had been limping the button a lot heads-up, so I took it as a sign of weakness,” said Beaudoin. “I was going to move in with any two, but I looked down at the king of spades, which is good enough, so I moved in and he instantly called and I hit the king on the flop.”

A few hands later, Beaudoin captured the title. But he was fortunate to even be heads-up with his good friend. With 16 big blinds left, which he later admitted was too deep to make the move that he did, he pushed from under the gun with A-7 offsuit. Matt Moody of Oregon, who had cashed in the first Ante Up Poker Tour series at Thunder Valley Casino Resort in California in November, snap-called with A-Q and Beaudoin rivered a straight to avoid being eliminated in eighth place.

Beaudoin, who plays $2-$5 no-limit cash games at Red Rock and several other rooms in Las Vegas, busted in one satellite before buying in directly to start his path to the title.

“I think knowing some of the players, since I play cash games here a lot, definitely helped,” he said.
Beaudoin has been playing more tournaments of late, and just two weeks before made the final table of the limit Omaha/8 World Series of Poker Circuit event at the Bicycle Casino near Los Angeles. It was his fourth WSOPC final table.

“I had some success last year taking down a couple of tournaments, so I decided this year that if I had a hot start, I’d play more,” said Beaudoin, who said he played 20-30 tournaments in 2012. “I’ve played two tournaments this year and have two final tables.”

But it was a tournament veteran who earned the most Ante Up Player of the Year points in the 12-event Red Rock Ante Up Poker Tour series. Charles Moore of Las Vegas, who has nearly 70 major cashes in his career, won Event 4 and finished fourth in the main event to nip Beaudoin for player of the series with 383.74 to 383.41. The Ante Up Player of the Year leaderboard can be found at anteupmagazine.com/leaderboard . Justin Young, who has nearly $4 million in career earnings and won the 2011 Festa al Lago, finished fifth for $6,910.

Tournament director Derek Glover and his staff designed a schedule with tournaments for all bankrolls and interests, with buy-ins from $40-$1,100. Also on the schedule: a heads-up event and a pot-limit Omaha event.

Tournament action played out in the Cherry nightclub, which offered players a view of the pool area during the day with desired tournament conveniences (restrooms, drink and food service) inside the club. Throughout the tournament, Red Rock’s poker room, under the direction of Mike Doe, was packed with cash-game action as players chased a $90,000 club-royal-flush promotion and a multi-property bad-beat jackpot of more than $112,000.

The Ante Up Poker Tour continues April 11-21 at Running Aces Harness Park (visit anteupmagazine.com/runningaces for more information), followed by events at Downstream Resort in Oklahoma, the Hard Rock Punta Cana in the Dominican Republic and Thunder Valley Casino Resort in California, with up to three more locations to be added. For more information, visit anteuppokertour.com.