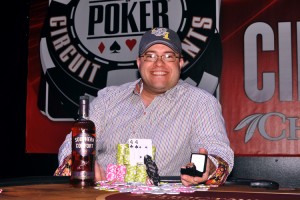 John Dolan had a remarkable 2012, including winning a tournament with . . . identical cards?

Do you prefer tournaments to cash games? I prefer playing tourneys; I enjoy them more. However, with no online poker, I think it’s important to play both to offset some of the swings that you can go through while playing live tournaments.

Are there other games you like to play? I really don’t play any other games frequently. I have played a handful of live PLO cash sessions, but besides that, I really don’t have experience in other games. It’s something I’ve told myself I need to do. But with the birth of my daughter, Lillian, a little over a year ago, I haven’t really studied or worked as hard at poker as I have in the past.

What do you like to do besides poker? Outside of poker, I enjoy watching sports and spending time with my family. Over the last year, I’ve just been trying to spend as much time at home as possible when I’m not on the road. It’s important to me to be home to see Lillian grow up.

How much do you attribute your recent success to your breakout 2010 November Nine run? That score was very important and honestly I don’t know where I would be without it. I was very blessed with the timing of it coming less than a year before Black Friday occurred. It allowed me to do a lot of things that I wouldn’t have been able to do otherwise. In 2011, I was fairly lazy showing up to main events here and there and not really grinding. It cost me financially a little but I really wouldn’t trade it because I relaxed and enjoyed life more, and I was around for (my girlfriend) Ashley as she was going through her pregnancy. The best thing it did for me though was help my confidence and that’s extremely important in poker when you believe in everything you are doing.
How much easier is it to play poker after having a huge score like that? It makes it easier to handle the swings that come with tournaments; that’s for sure. It also can make you lazy and not want to grind; it had that effect on me for a little while.

After your Million Dollar Heater win in 2012, the staff at the Beau played a trick on us and gave you two

to hold for your winning picture. We thought it was funny and ran with it, but our readers flipped out. Did you have any idea that would create such a stir? Honestly I don’t even know if it was (manager) Johnny Grooms, the cameraman, or dealer who pulled the other 9S from the other deck to take the picture. I’m not really the type to care about stuff like that and I guess I see people’s concern as to why there was two 9S in the picture, but it was all in good fun.

What would you consider your greatest poker moment? My greatest accomplishment is, of course, final-tabling the WSOP main, just because there is no other tournament with that feeling around it. It is unlike any other experience as you are getting down to a couple of tables in that huge room where there was once hundreds.
You’ve never been a flashy kind of guy concerned with fame, but how important is a bracelet (or any other title you haven’t earned) to you? I would love to win a bracelet or a WPT title. My goal is to just perform to the best of my ability in the spots that are presented to me in poker and in life. If that means winning a bracelet, great, if not it won’t change how I feel about myself as a poker player or a person one bit. It’s a huge accomplishment and it’s why we as poker players compete. I think we will find that if we focus on getting better and improving that the accomplishments and accolades will follow.

You used to deal at little Jefferson Country Kennel Club poker room in North Florida. Do you miss any part of that life? I wouldn’t say I miss actually dealing, but I do credit some of those people with helping me get to where I am today. I will always be grateful for that. I had a great boss who let me take off of work for weeks at a time to go play. He pretty much allowed me to show up to work when I wanted. When we were slow at work, he let me play online in his office and bought pieces of me in tourneys that I wouldn’t have been able to play otherwise.

You recently moved to Mississippi, what prompted that? I’ve been around the Mississippi Coast since some time in 2010. What finally made me settle down there, though, is the birth of my daughter in late 2011 and the fact that Ashley and her family are from around there.

How is your daughter Lilly? She’s doing great! She’s 13 months old now and growing like crazy. She’s totally changed my life. It’s really easy to get caught up living a selfish lifestyle in this business, but since her addition to our family, all I care about is making her smile and providing for her so she has all the opportunities in life to succeed.

What does it mean to you to be on the cover of Ante Up and win this honor? This is the first thing in poker I’ve really ever won like this so it’s cool. I think it will be neat to show my daughter someday and hopefully I can teach her that if you work hard you can achieve your goals.

Baptiste Chavillaz of Portland, Ore.,, has taken the early lead in the race for Ante Up’s 2013 Player of the Year, winning the World Series of Poker Circuit Main Event at Bicycle Casino in Bell Gardens, Calif., in January.

But with more than 70 other qualifying events already on the schedule, and more than 300 total expected by the end of the year, players wanting to be Ante Up’s Player of the Year will have scores of chances to have a turn in the top spot before the season ends Dec. 31.

Ante Up awards points to the top-10 finishers in qualifying events. The formula, found at anteuppokertour.com, rewards players more heavily for success in tournaments with large fields rather than big buy-ins, though the amount of the buy-in also plays a factor.

All events in any Ante Up Poker Tour series qualify, giving players who participate in an AUPT series a great chance of racking up lots of points in a short time in one location. The main events of major tournament series host by Ante Up partners also qualify, which means some of the events with the biggest fields of the year are included.

Finally, all multitable tournaments on Ante Up Cruises or events in which an Ante Up Cruise or Ante Up Poker Tour World Championship package are among the prizes qualify, giving players chances to earn points for tournaments with buy-ins as little as $25. All told, players anywhere in the country and of all bankrolls have a chance to make a run at the Ante Up Player of the Year title.

Standings for Ante Up Player of the Year, and results of qualifying events, can be found at anteupmagazine.com/leaderboard .

2. AARON MASSEY (ELMWOOD PARK, ILL.): Massey, one of the most feared players in the Chicago area, had nearly two dozen major cashes in 2012, including 11 in World Series of Poker Circuit events and three in World Poker Tour events, and makes our list by virtue of winning the largest Ante Up Player of the Year qualifying event of the year: The River at WinStar World Casino in Oklahoma.

3. ELTORNA “BG” GANT (CASA GRANDE, ARIZ.): Gant had a runner-up finish this year during a Venetian Deep Stack Extravaganza event in 2012, but he takes this lofty spot on our list for navigating the massive field that turned out for the Arizona State Poker Championship Main Event at Talking Stick Resort in his home state.

4. BARRY HUTTER (BRADENTON, FLA.): Hutter was all over the Sunshine State in 2012, winning the WPT Stax Showdown Main Event at Seminole Coconut Creek in February, finishing fifth in the Heartland Poker Tour event at Daytona Beach Kennel Club that same month, and then ending the year with a third-place finish in the Palm Beach Christmas Classic Main Event to vault into the top five.

5. ABRAHAM ARAYA (CARROLLTON, TEXAS): Araya had success all over the country in 2012, from Las Vegas, to Atlantic City to Louisiana. But he held on to the top spot in our rankings for several months based on his victory in the main event of the WSOPC at Choctaw Resort in Oklahoma.

6. TOMMY VEDES (JACKSON HEIGHTS, N.Y.): Vedes had a phenomenal WSOP in 2012, cashing in five events (two final tables), but earned his spot on our list by winning the WPT Seminole Hard Rock Showdown Main Event in Hollywood, Fla., in April and then making the final table of the Florida State Poker Championship at Isle Casino Pompano in July.

8. JAMES HARNDEN (COBOURG, ONTARIO): Harnden has a string of successes over the years in his native Canada, but makes our list this year by winning the WSOPC main event at Palm Beach Kennel Club, which drew a deep field to Florida in February.

9. STEWART NEWMAN (WESTON, FLA.): Newman made the final table of the Isle Poker Classic Main Event in January in Florida, but moved into the top 10 with the championship of the Deepstack Challenge Main Event at Palm Beach Kennel Club a few months later.

10. ANDREW DENICK (ROCKLEDGE, FLA.): Denick got on our board in July with a runner-up finish in the WPT Rebound Series Main Event at Derby Lane in Florida, and then moved into the top 10 by winning the HPT a few months later at Daytona Beach.