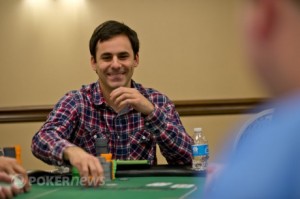 Mike “Wisco” Murray is renowned on the Midwest circuit as a poker player, but now he’s taking on a new opportunity to work with 13-time World Series of Poker bracelet-winner Phil Hellmuth. The 31-year-old Murray has been named head consultant for Hold’em with Hellmuth, which helps partner organizations with Hellmuth to raise money for charity.

“We work with charities across the United States to help them bring more awareness to their causes. We do this by running poker tournaments that benefit them,” said Murray, who, like Hellmuth, hails from Madison, Wis. “I work hand-in-hand with the different charities to help them set up and promote these events.”

“I really enjoy what I’m doing and it’s very rewarding to take something I love like poker, and be able to turn it into raising money for people and places that really need it,” Murray said. “One of Phil’s 10 goals in life is to raise $100 million for charities worldwide. … We have an event at the Kentucky Derby coming this May, as well as an event with Agrace HospiceCare in Madison in December 2013.”

Hellmuth has raised $20.4 million toward his charity goal. If you would like to learn more about Hold’em with Hellmuth events, or how to get involved, visit holdemwithhellmuth.com.

— Chad Holloway is Ante Up’s Wisconsin Ambassador. He’s also a Senior Writer for PokerNews.com and is a sponsored member of Team Blue Shark Optics. Email him at anteupchad@yahoo.com or follow him on Twitter @ChadAHolloway.