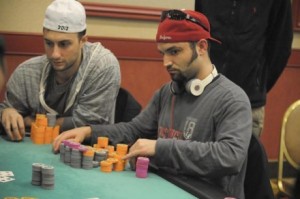 Hollywood Casino in Lawrenceburg, Ind., had a great turnout for its inaugural Hollywood Poker Open. Eight event winners and five mega-satellite winners are advancing to the $500K guaranteed HPO championship at the M Resort in Las Vegas on June 28-30. Each received a $2,500 seat at the championship and $1,500 in travel expenses.

Andrew Jeffrey of Mansfield, Ohio, outlasted the 308 entrants, winning $35,266 in the main event. Here are the winners from this series:

HPT BELTERRA: Greg Raymer, the 2004 World Series of Poker champ, captured a record fourth Heartland Poker Tour title this season, winning the event at Belterra Casino for $106K. He is the first player to win four HPT titles (and he did it all in one season). His other victories came at River City-Lumiere in St. Louis, Route 66 Casino in New Mexico and Prairie Meadows Casino in Iowa. He is the HPT’s all-time money leader.