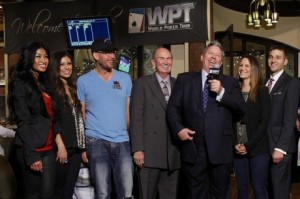 But it was another pro, Noah Schwartz, who captured the coveted first place prize of nearly $403K in the wee hours of Nov. 13. Schwartz of South Florida has been making a name for himself lately but hadn’t really gotten over the hump of winning a major title. Ante Up’s Dave Lemmon interviewed Miami Beach’s Schwartz shortly after the victory and you can read that here.

The $3,500 main event attracted a remarkable 477 players across two days for a $1.5 million pool.
Schwartz came to the final table with nearly half of the 14 million chips in play. Schwartz ended the tournament on Hand 80 by besting Byron Kaverman heads-up. Kaverman earned $236,592.
“Finally,” Schwartz said with a smile as he held the winner’s trophy.

Another story of note: Blake Whittinton won the first tournament of the series and followed that up with another victory in Event 8. The former UNC Tar Heel turned out to be the Michael Jordan of the Jacksonville Fall Series, easily handling a final table of bestbet Jacksonville tournament and cash-game regulars, including Edwin Smith, who Whittinton beat heads-up for the title.

BESTBET ST. JOHNS: The bestbet family recently closed its St. Johns facility with an eye on relocating it to better serve its patrons. I’m sad to see the location close as I was one of the original three supervisors hired to open the room there before I moved on to Ocala’s poker room. The relocation plan is to find a site that offers greater accessibility to the overall region.

“Northeast Florida continues to be a very strong market for the entertainment options that our facilities offer and we are excited about the opportunity this relocation provides us in St. Johns County,” bestbet spokesman Michael Munz said. “Bestbet poker, simulcast and gaming will continue to grow in this region and all our locations will continue to showcase our friendly staff and varied gaming product.”

Since opening its first poker room in northeast Florida in 2004, bestbet had grown from 30 tables to 121 at its three locations.

DBKC: The second annual Holiday Charity Classic at Daytona Beach Kennel Club & Poker Room on Dec. 2 attracted about 300 players and more than $30K in cash and prizes were awarded, including a $6,500 Borgata package to the winner, David Tate. Also, Ante Up Poker Cruise packages, Deep Stack Charity Classic seats and more were awarded in addition to cash payouts. The event was a bounty tournament this year. Players received $10 for each person they eliminated, plus they received a $10 blue ticket they could drop into the bin of the charity of their choice. On hand were Ante Up senior strategy columnist Lee Childs, who cashed in 10th place, and Ante Up publisher Christopher Cosenza, who cashed 27th. If you missed this opportunity to win an Ante Up Poker Cruise package, dry your eyes. DBKC is giving away three Ante Up Poker Cruise packages in January via drawings/events on Jan. 1, Jan. 10 and Jan. 21. Visit anteupcruises.com for more information.

— Chaz Allen is the Ante Up Ambassador for North Florida. Email him atanteup.chazallen@gmail.com.