A multi-property bad-beat jackpot for Caesars 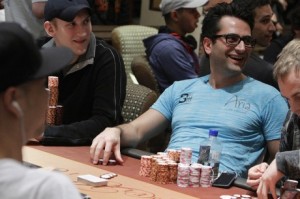 On Jan. 10, Caesars Entertainment will start a new multi-property mega-beat progressive bad-beat jackpot, which will be seeded with $200K and the initial qualifying hand being four aces beaten. When the jackpot passes $300K, the qualifying hand will drop to four kings, and each $100K after that will drop the qualifying hand another ranking. If the jackpot hits $1,400,001, four deuces beaten will take down the prize. Eight Caesars Entertainment properties will participate in the mega beat, seven in Las Vegas: Caesars Palace, Harrah’s, The Quad (formerly the Imperial Palace), Flamingo, Bally’s, Planet Hollywood and the Rio, and Harveys in Lake Tahoe.

Caesars has designed the payout structure to generously reward everyone playing in a hold’em game in any of those properties when the bad beat hits. The losing player will get 20 percent of the prize, the winning player will get 10 percent, and the rest of the pool will be distributed equally to the active players at each of those eight properties.

NEW GAME AT ARIA: The Aria just introduced a new game and concept in its room. It’s called “Multi Action Poker.” Players play two hands simultaneously, getting their cards dealt from two dealers at the table sitting opposite each other.

Each game is played with its own deck. Players must bet from separate stacks and are not allowed to borrow from one game’s stack to bet in the other game. However, if they lose all of their chips, they’re allowed to take one buy-in from their other stack, provided that they’re left with at least the minimum buy-in in the other game. The games are designated “red” game and “blue” game to keep it straight.

The game is designed to attract players looking for extra action. Players will be able to play twice as many hands during the same session as in a normal live game, so folding a starting hand won’t necessarily mean a few minutes of idle time waiting for the next hand. And of course, they’ll have to stay alert to follow the action in two games at once. But unlike multitabling online, players will have the same players to study in both games.

One fun feature is the games can be different. Based on player interest, you can be playing a hand of low-limit hold’em at the same time you’re playing Omaha/8, with different stakes for each game.

The game is being offered on a trial basis by the Aria, exclusively for now. Adam Altweis, director of poker operations, thinks the game could really take off, and was eager for his room to be the one that introduced it. During the introductory phase, there’s a maximum rake of $3 and players will receive $3 an hour in comps for playing. Early reviews have been positive, with most players reporting it took only about five minutes or so to get used to playing two hands at once.

NEW EVENT AT VENETIAN: The Venetian is introducing a new type of tournament called Survivor. Rather than playing down to the final player, the tournament ends when exactly 10 percent of the field remains. Those players will each share the same payout.

Tommy LaRosa, Venetian’s tournament director, said the idea is to give more players a chance to “go home happy.” The typical tournament prize distribution is heavily weighted toward the top two or three finishers.

Those players are quite pleased with the results, but the rest of the field, players who have played for hours, are frustrated with a minimum cash.

Now more players will get a significant payday when they do cash, instead of getting back just a bit more than their buy-in. It will be interesting to see how this format changes the strategy of the players, especially as they approach the bubble.

The Venetian has added the Survivor tournament to its regular weekly schedule and is going to have several Survivor events as part of its next Deep Stack Extravaganza, which will be Jan. 31-Feb. 27.

MGM GRAND: The MGM Grand poker room is establishing a niche for itself by offering low-limit mixed games most evenings. Limits start at $4-$8. It also has a popular H.O.R.S.E tournament every Tuesday night. Of course, the room remains a popular choice for limit and no-limit hold’em.

ON THE MOVE: A couple of poker rooms have relocated within their casinos. Treasure Island moved its room next to the sports book (and adjacent to the popular Cantor’s Deli), now offering seven tables of low buy-in tournaments and limit and NLHE.

Harrah’s moved its room to the front of the casino, right up against the Las Vegas Strip and right next to one of the main entrances. Its seven-table room will see plenty of foot traffic from tourists. The room continues to offer daily tournaments and NLHE, and hopes the new location will help them re-establish a $3-$6 limit game.