A look back, a look ahead at Mississippi poker 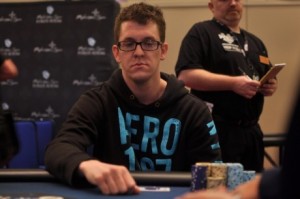 I’m celebrating my third holiday season with Ante Up this year, and every bit of it has gone by in a flash. I can’t say enough how much I enjoy hearing from you, seeing you at the tournaments or cash tables and celebrating your victories.

Another year has come and gone, and it was a busy year, with January starting out strong at the Beau Rivage Million Dollar Heater. The first event gathered the largest crowd in Mississippi history with 1,452 entrants. Scott Williams of Memphis took home the $72,298 top prize. The month wrapped up with the Heater main event. Tournament director Eric Comer and poker room manager Johnny Grooms made the decision to move away from the World Poker Tour televised franchise and instead invest the money into a guaranteed prize pool and tournament promotion. No one missed the TV cameras while they were competing for the first million-dollar guarantee in Mississippi history. It wasn’t much of a surprise that Gulf Coast pro John Dolan won the event and $336K.

It would be the first of many significant cashes for Dolan.
February brought action to Tunica (Kurt Jewell snapped off the World Series of Poker Circuit main event) and the retirement of long-time tournament director Jimmy Sommerfeld. Karen Kaegin took the reins at Gold Strike as the poker room manager and spent the year revamping tournaments, promotions and action. Gold Strike, a longtime staple in the Tunica market, is fierce competition for the most round-the-clock action in North Mississippi.

The April Delta Gold tournament was the first big tournament after Kaegin’s arrival, and her hard work had paid off as numbers were great, action was at an all-time high and Gold Strike was once again the place to be.

As we moved from spring into the early summer, Mississippi had a strong showing of talent at the WSOP. Mixed-game and Omaha players from the Magnolia State went and conquered. David Nicholson, Tim Burt and Galen Kester, all regular faces in the north and south ends of the state, had successful series with multiple cashes. Kester would keep the heater alive when he’d come home to conquer the Gold Strike World Poker Open in August for an impressive $165K payday. Known for his Omaha prowess, the WPO victory is Kester’s most significant NLHE cash, and it landed him on the cover of Ante Up.

Fall brought turmoil, as the WSOPC Biloxi and the Gulf Coast Championship were hurt by Hurricane Isaac. Threats of impending bad weather led to lackluster numbers at the IP Biloxi WSOPC stop. It didn’t stop Kyle Cartwright of Bartlett, Tenn., from winning the main event, earning his fifth circuit ring and tying Mark “Pegasus” Smith’s record. The GCPC event at the Beau Rivage wouldn’t fair as well as the IP tournament. The Beau Rivage was forced to evacuate, ending the series after opening weekend.

Sliding into winter, Steve Reed became the poker room manager at Harrah’s in Tunica after the departure of longtime co-manager Chris Griffin. On Jan. 19, Harrah’s hosts a $15K guarantee, awarding seats for its WSOPC event, which begins Jan. 24. Call the poker room for more details, as the turnout should be huge.
Now that we’re all caught up, it’s time to look forward. The Beau Rivage brings back on Jan. 4 the Million Dollar Heater. I’ve watched the Mississippi tournament series build steam with new events and structures over the past 12 months, and I think we can look forward to an unrivaled January event. Ridiculously large fields should lure in new faces and all the familiar ones.

After the Heater, it’s a mad dash to Tunica for the WSOPC at Harrah’s, then a quick turnaround and we’re back in Biloxi for the Spring Break Classic at the Beau in March.

Look for me at all of the events I mentioned. There’s also still time to join me on the Feb. 4 Ante Up Poker Cruise leaving from Port Canaveral, Fla.  Thanks for spending 2012 with us, and for reading. I look forward to hearing your stories and celebrating big wins in 2013.

— Jennifer Gay is Ante Up’s Mississippi Ambassador. She can be contacted at
facebook.com/aceofjewels or at jennifergay80@hotmail.com.