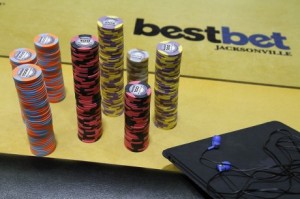 Andy Geffen has a Twitter handle you might not expect from a guy who’s cashed in three of his past four tournaments: @COpokerFISH. (Twitter bio: “Just trying to run my business around my poker schedule.”)
There’s a reason for the name, of course. Over the years, the 42-year-old resident of Westminster, a suburb of Denver, has gotten to know and play with a number of poker pros. When those pros would put Geffen’s contact info in their phones, Geffen said, they tended to give him a name they could easily remember: something such as, “Andy Denver Fish” or “Andy CO Fish” or, well, you get the picture.

Geffen isn’t offended: “Hey, I am a fish compared to those guys.” Maybe, but Geffen’s stock certainly is on the rise. Not only has he had a nice run of cashes lately, including sneaking into the money (finishing 70th) in September’s Heartland Poker Tour Main Event at the Golden Gates, but he also pulled down the victory Oct. 18 at the World Poker Tour Regional Main Event at the Isle Black Hawk.

The Isle event, dubbed the Colorado Poker Showdown, attracted 162 players for the no-limit hold’em main event and generated a prize pool of $299,700. Geffen brought home the trophy and a $62,350 payout for the win.

After the win at the Isle, Geffen cashed again during a trip to Las Vegas, winning $2,771 against his $600 buy-in at the Venetian Deep Stack Extravaganza IV. He placed ninth out of 178 entrants for that score.

Again, not a bad little run for a self-described fish, but Geffen’s a steady player who’s been building up his bona-fides since he began playing poker in his teens. The New York native took a break from poker after moving to Colorado in July 2007 and discovering the $5 limit on all pots (because of local laws) at Black Hawk/Central City rooms. He kicked it back in gear when the limit was increased to $100 in 2009.

Geffen, who owns a business where he buys bad debt and collects on it, credited his recent run in part to playing with top-notch players. He particularly noted the help of his buddy, Chris Tryba, who won this same tournament when it made its debut at the Isle last year.

In the Isle win, Geffen said he simply played a steady game, staying tight and playing solid position poker in the early rounds, then opening his game as he advanced to the final table. That’s when Geffen’s patience came into play.

“I went card dead for a stretch, and I used to get impatient when that happened, make bad plays. I’ve been working on riding it out, staying relaxed, playing my best game.”

He was in second place when the table condensed to the final four, and Geffen earned the win just 30 minutes later, taking down Denver’s Francois Safieddine, a seasoned player with a WSOP bracelet and more than $1.7 million in tournament winnings. Fortune smiled on Geffen on the final hand, as his A-2 outflopped Safieddine’s A-3.

Geffen said he didn’t have any big plans for his first-place winnings, but it’s a nice little addition to the bankroll, especially when he had another poker trip to Vegas planned for right after this interview. At this rate, he might need to change that Twitter handle.