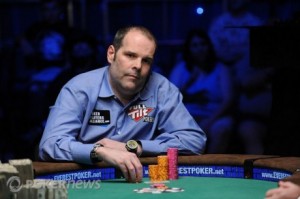 Justin Como, of Grove City, Pa., won $139,271 in October by taking the best bad beat of his life at Presque Isle Downs and Casino. While Edward Orr of Erie got $69,635 for his “winning hand.” The remaining shares were split among Scott Coughencur, of Waterford; Donald Beuchat, of Meadville; Vincent Mezzacapu and John Zielinski, both of Erie; Donald Eckberg, of Houtzdale; Samuel Tiche, of Boyers; Robert Altmantman, of Williamsville, N.Y.; and David Sillanpaa, of Perry, Ohio ($8,704 each).

“The bad-beat jackpot was created to enhance the customer experience by providing an additional opportunity for the players to win,” Presque Isle VP and GM Mike Tamburelli said. “It is certainly the largest jackpot our poker room has seen since we opened and we’re glad to see 10 very lucky players walk out with their share of over $278,000.”

In other Moneymaker news, the 2003 world champ met with Ante Up contest winner Ken Allard, pictured, and he played cash games with the Massachusetts resident, giving him tips throughout the session.

— Mike Owens is the Ante Up Ambassador for Western Pennsylvania and West Virginia. You can follow him on Twitter @Holdemag and check out his blog at CheckRaze.com. He can be reached at anteupowens@gmail.com.