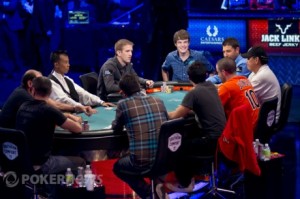 Late October saw the conclusion of the Isle Open as the area’s best-known poker champion took home his first South Florida title. Though Florida only began allowing large buy-in tournaments in July 2010, Michael “Grinder” Mizrachi had never captured a large first-prize in his back yard, despite his huge success in tournaments all over the world. With several World Poker Tour victories and the $50K Poker Players Championship at the World Series in 2010 and 2012, the Grinder has mowed down the competition with his aggressive and confounding style to amass more than $14 million in earnings. That figure has him eighth on the all-time money list, according to the Hendon Mob.

He said he enjoys playing in the bigger South Florida events, but he almost forgot about this one, hurrying over from his N. Miami Beach home to be the last player registered in the $2,200 event after realizing at 3:30 p.m. there actually was an opportunity for “quick cash,” as he called it.

“There’s no place like home,” he said. “It’s easier to drive 20 minutes to a tournament than to fly halfway around the country or even the world to play; all it costs is gas for the car.”

All of the major tournament series at the Isle draw well from all parts of the state, especially from the Tampa Bay area, and that set up an interesting dynamic at the final table of the Isle Open main event. Five of the nine players were from the Tampa area, while the other four were South Floridians. That was no surprise to the Grinder, who said, “The Isle is a great place to play poker, the staff is great and everyone is really nice. Anyone within driving distance is really going to be interested in coming here.”

After Florida west-coasters Stephen Diamantas and Matt O’Donnell were eliminated along with Isle regular Daniel Genachte, the final six was a three-on-three matchup between Tampa Bay and South Florida.  Justin Zaki of Tierra Verde was to first to go, disappointed with his finish but happy to collect more than $20K for the four-hour drive from St. Petersburg. After finishing fourth in the WPT Seminole Hard Rock Showdown in 2011, Zaki welcomes the opportunities to play in high buy-in events in South Florida.

“It’s always fun to come down here,” said Zaki, wearing one of his many Tampa Bay Rays caps. Phillip Weast of Tampa and Joseph Gibbons of Tarpon Springs followed a bit later, leaving only Ory Hen, the locksmith from Cooper City and transplanted New York pro Mukul Pahuja of North Lauderdale to battle the Grinder. Pahuja had posted a victory in the opening event of the series and Hen was in his third final table of the series, earning a four-way chop in Event 2.

Though Pahuja was the chipleader in the early part of the final table, he lost the advantage after shipping a large pot to the Grinder, which put Mizrachi in familiar territory, the one where no one can pin him down.

“I have a style that no one has seen before,” Grinder said. “I’m very different than most players. I like to take a shot sometimes and, of course, it doesn’t always work and you lose chips, but it happens. I play the other players more than my cards and you never know what to expect from me.”

The Grinder always has prided himself on his ability to adapt to the players at his table, making adjustments and constantly changing gears on a moment’s notice based on his table image and opponents’ styles.

However he does it, the finish was classic Grinder as he eliminated Pahuja in third place ($50K) and then dispatched Hen after being dealt 5S-6S. Hen collected nearly $76K for his second-place finish.  Hen had flopped a set of kings, but Grinder doesn’t like to fold ever, and with a huge chip advantage he hung around long enough for runner-runner spades to give him the winning flush and the Isle Open trophy, along with $128K first prize.

His busy schedule cut the evening short, though, as Mizrachi had an early plane the next morning to L.A. to host the Breeder’s Cup charity tournament, then had plans to travel to the Mohegan Sun in Connecticut to participate in the activities of the DeepStacks National Championship later in the month.

However, the Grinder will be back on the South Florida poker stage in January, as the DeepStacks Tour has partnered with the Players Poker Championship and the Isle Casino to kick off their 2013 season in Pompano Beach on January 28-29. That event will constitute the tail end of the Isle’s first major series, the Isle Classic.

CHRISTMAS CLASSIC: The second annual Christmas Classic runs Dec. 7-16 at Palm Beach Kennel Club and has $300K in guarantees. Schedule and details are in the current issue of Ante Up.