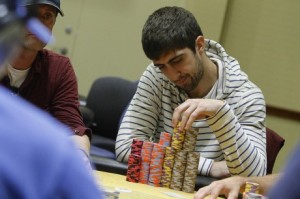 The upcoming year promises to bring even bigger and better things. I hope your plans for the New Year include competing in one of our exciting new Ante Up Poker Tour events at great locations across the United States and beyond. Check out the dates, schedules and locations at AnteUpPokerTour.com.
There are many excellent AUPT destinations to travel to, but if you prefer to stay close to home, Downstream Casino in Quapaw, Okla., will host the Ante Up Poker Tour Four States Poker Championships (May 17-26). I hope to see one of you on our cover as the champion! A wide variety of events will be offered, including no-limit hold’em, pot-limit, Omaha, stud, razz, Omaha/8 and H.O.R.S.E. The goal is to offer players a variety of events at affordable buy-ins.

KANSAS STAR CASINO: Best of luck goes out to the Kansas Star Casino on the grand opening of its new permanent location in mid December. Over the past year, the casino has been operating in a temporary facility that will become the event center.  The permanent location will feature a larger poker room, gaming floor and lodging facilities.

Peninsula Gaming is a Midwest-based conservative growth company that operates in rural markets. Since 1999, it has built and acquired a group of casino properties. Details on this exciting new poker room will be featured in our upcoming January issue.

Choctaw Casino also says goodbye to manager Ken Lambert as he will be table games manager at Sky Ute Casino.

HARD ROCK TULSA: One of the original and player favorites, Cherokee’s Hard Rock Casino in Tulsa, has committed to bringing back bigger and better poker to the casino. Good luck and best wishes to new poker room manager Eric Lawless, who has been with the company since 2002, working his way up to a management role. He began at the Tulsa location, then moved to oversee the poker room and tables games at Cherokee Casino Roland and Cherokee Casino Salisaw. He now will oversee the Tulsa poker room, which was moved to the new gaming area in the casino that opened in late September. The smoke-free 12-table poker room features many amenities popular with players, including a dedicated sound system, seven televisions, two lounges and increased space between tables to allow for player comfort and ease of movement without interrupting games.

There’s a new progressive bad-beat jackpot ($60K at press time) and the room continues to offer daily, weekly and monthly tournaments. Plans include featuring major tournaments throughout the year as well. Go to hardrockcasinotulsa.com for more info.