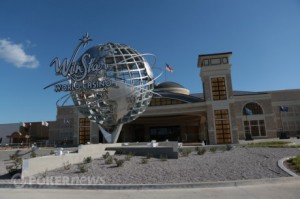 Fall poker in Mississippi has been thwarted once again by a hurricane. Regular attendees at the Gulf Coast Poker Championship at the Beau Rivage know that a little power loss or bad weather isn’t unusual for this fall event. It is, after all, at the peak of hurricane season. This time the threat of Hurricane Isaac managed to cancel everything but the opening weekend. Players and staff evacuated the casino just a couple of days before Isaac made landfall. I made my way down to the Gulf Coast to survey the damage after Isaac had cleared and am happy to report that standing water and relocated sand are the worst of it.

All Biloxi poker rooms were back open for business by the end of the week, none the worse for wear. Though it’s never a popular idea to shut down one of the best poker tournament series on the coast, I commend tournament director Eric Comer and poker room manager Johnny Grooms for giving players and poker staff ample notice for making travel plans. Better to be safe than sorry.

Finishing up just before Isaac could wreak havoc, the World Series of Poker Circuit stop at the IP Biloxi came to a satisfying conclusion with a final table of Southern circuit all-stars. The first-place victory went to none other than Kyle Cartwright of Bartlett, Tenn. Is this guy on fire or what? Perfect timing, too, as his Oct. 12 wedding will no doubt leave him needing a few extra wins in the bank.

I visited the IP while the main event was down to three tables. I don’t think I’ve seen many fields with as many prolific and well-known circuit players as this one. Other notable entrants included Allen Kessler, Ryan Lenaghan, Ashly Butler, Kurt Jewell, Tyler Smith, Long Nguyen, Dwyte Pilgrim and John Dolan.

Though Cartwright snapped off the main-event victory and secured his place in the national championship next year in Vegas, the title of Casino Champion went to Cory Wood of Murfreesboro, Tenn. Though Wood’s a professional, he isn’t a typical fixture on the circuit. He said of his victory: “It’s nice to secure my spot in the national championship early on, so now I don’t have to chase points. I can play what I want to now.”

With our fall lineup challenged by Isaac, it looks like the next time I’ll see you in the Magnolia State will be at the Gold Strike for the Nov. 29-Dec. 9 Winter Poker Classic. I’m looking forward to it.

• On a side note, I just finished dealing on the Ante Up Poker Cruise in late August. It was the absolute most fun I’ve had at a poker event. The action was non-stop and fantastic. The next time I’m cruising with Ante Up will be Feb. 4-8 from Port Canaveral, Fla. I’d love to see a strong showing of Mississippi players.

The rates are super-affordable and I can guarantee we’ll have a blast. Come join me!

— Jennifer Gay is Ante Up’s Mississippi Ambassador. She can be contacted at
facebook.com/aceofjewels or at jennifergay80@hotmail.com.