Ante Up Poker Tour launches in November at Thunder Valley 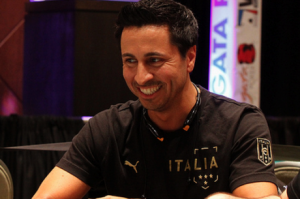 If you’ve ever dreamed of seeing yourself on the cover of a national poker magazine, your chance begins in November.

The Ante Up Poker Tour will kick off its inaugural season on Nov. 19 at Thunder Valley Casino Resort near Sacramento, Calif., and will feature up to 11 more tour stops a year, including the Ante Up Poker Tour World Championship at the Hard Rock Punta Cana. What has poker players and managers alike buzzing? The winner of each main event will be featured on the cover of Ante Up Magazine.

“Just as Ante Up Magazine was created to appeal to the ‘everyday player,’ the Ante Up Poker Tour is doing the same thing,” said Christopher Cosenza, who publishes Ante Up Magazine with Scott Long. “Those ‘everyday’ players will now know exactly what it takes to earn the admiration of friends and families by seeing themselves on the cover of Ante Up. Just win an Ante Up Poker Tour Main Event.”

In addition to the magazine cover and a fistful of cash, main event winners will get a personalized Ante Up champion’s jacket and points toward Ante Up’s Player of the Year title. In fact, all events at each Ante Up Poker Tour stop will now qualify for the Player of the Year race, giving players of all bankrolls dozens of more chances each year to work their way up the leaderboard.

Casinos hosting Ante Up Poker Tour events are free to design their series, structures and buy-ins as they see fit, giving them the flexibility to design an event that plays to regional desires.

“No one knows a poker room’s market better than the poker room itself, so by not forcing poker rooms into a one-size-fits-all package, we believe we’ll see bigger fields and greater variety in structures, events and buy-ins on the Ante Up Poker Tour,” Long said. “And that means every tour stop is a new adventure and experience for traveling players, yet retains the comfort of familiarity for local players.”

The inaugural season of the Ante Up Poker Tour kicks off in November at Thunder Valley Casino Resort, a AAA Four-Diamond resort that has capacity crowds for its previous tournament series.

Running Aces Harness Park, a cutting-edge cardroom that holds several tournament series a year in the Minneapolis-St. Paul area, will host a tour stop in April, followed by a May stop at Downstream Casino Resort, an exquisite casino that towers over Oklahoma near Joplin, Mo., and draws impressive tournament fields.

The Ante Up Poker Tour World Championship will play out July 28-Aug. 3 at the Hard Rock Punta Cana on the exotic island nation of Dominican Republic. The Hard Rock is a luxurious, all-inclusive resort, where guests will enjoy complimentary gourmet dining, alcohol, land-based activities and a generous resort credit, good for golf and spa treatments. Daily and nightly tournaments will be in the well-appointed rock-and-roll-themed poker room.

Thunder Valley Casino Resort has committed to hosting a second tour stop in November 2013, and Running Aces will host additional events in 2014 and 2015.

“The enthusiasm each of these resorts has for hosting an Ante Up Poker Tour event is going to leave no doubt that players will thoroughly enjoy themselves while on site,” Long said. “We’re looking forward to filling out the rest of our schedule with properties equally excited to be a part of this inaugural season.”

Up to eight more 2013 stops will be added to the schedule soon. For more information, visit AnteUpPokerTour.com.

The following outlines more details on the scheduled tour stops:

Thunder Valley Casino Resort • Lincoln, Calif. • thundervalleyresort.com
The Ante Up NorCal Classic is the inaugural Ante Up Poker Tour stop, offering events and buy-ins for all players, including a staggering 25 mega-satellites for the $1,100 main event. This is the third year Thunder Valley Casino Resort has run a tournament series during Thanksgiving and it continues to grow each year. This year’s calendar will include a six-handed event, bounty tournaments, H.O.R.S.E. and Omaha/8, plus plenty of no-limit hold’em, including a $100,000 guaranteed three-day event that begins the day after Thanksgiving.

“The series will offer something for every poker player that visits. Our goal is to make the Ante Up NorCal Classic an event that draws from all over the West Coast,” said Ben Erwin, director of poker operations. “Players who have visited during the Sweet 16 and Players Championship series expect capacity turnouts, quality structures and a knowledgeable tournament team. We look forward to seeing you for the Ante Up NorCal Classic.”

“Sacramento is ready for a poker tour event,” Erwin said. “Ante Up Magazine has become very visible on the West Coast and we really like the regional coverage provided by Ante Up Northern California Ambassador Bret Miller. We are excited to host the inaugural tour stop and be a Day 1 partner with Ante Up.”

Running Aces Harness Park • Columbus, Minn. • RunningAcesHarness.com
Running Aces will use the same player-friendly structure it uses for its annual Midwest Poker Classic for its Ante Up Poker Tour main event. Players will start with 25,000 units, levels of 40 and 50 minutes on Days 1A and 1B, and 60 minutes on Day 2. Day 1A and 1B have work-friendly 5 p.m. start times, and qualifiers and super satellites will be offered.

“When Cliff Demos (Ante Up Poker Tour sales director) first approached us at Running Aces regarding hosting a stop on their inaugural Ante Up Poker Tour, it was basically a no-brainer for us,” said Gregg Bartku, cardroom manager. “Ante Up Magazine has obviously become one of the premier poker magazines in the country. Its increased coverage of Midwest poker rooms has really become something that is important to our business and our players. Here at Running Aces we take pride in providing the best possible product to our poker-playing guests and I am confident that this partnership will provide just that.”

“I’m really excited to partner up with Ante Up for this poker tour,” said Tristan Wilberg, tournament director. “We have been able to make a name for Running Aces and our poker tournaments on how good the structures are. When you add in a well-known national publication like Ante Up, it’s a recipe for success and one of the best tournaments this area will see. There are some very good card players here in the Midwest and they are going to get everything they could want, a great structure and a chance to show the nation how good they really are.”

Running Aces has committed to running additional Ante Up Poker Tour events in 2014 and 2015.

Downstream Casino Resort • Quapaw, Okla. • downstreamcasino.com
For the first four years Downstream Casino Resort has hosted the Four States Poker Championship, it has offered a wide variety of events, including no-limit hold’em, pot-limit Omaha, stud, razz, Omaha/8 and H.O.R.S.E. During the series, players will earn points based on how high they place in each event in a race to become the event’s “Master of Poker.”

“The Four States Poker Championship is a chance for the players to play events that they may have seen on TV, but never got a chance to play,” said Dale Hunter, poker room manager. “We try to bring more affordable events to our players. I am always trying to talk to our guests and offer the games that they are interested in playing.”

Downstream Casino Resort, owned by the Quapaw Tribe, features a 222-room luxury hotel, with heated outdoor pool, spa, golf course and several dining options, including the Red Oak Steakhouse. Before next year’s event, the resort will add 150 rooms, and discounted room rates will be offered to tournament players.

Hard Rock Punta Cana • Dominican Republic • HardRockHotelPuntaCana.com
The Ante Up Poker Tour World Championship features 14 events during the week, culminating with a three-day $1,100 main event. In addition to no-limit hold’em, a no-limit hold’em/pot-limit Omaha combo event, stud/8-Omaha/8 combo event, no-limit bounty event and ante-only event are on the schedule, as is one rebuy event. Single-table main-event satellites will be offered.

“The unique location of this event demands a schedule that appeals to a wide variety of players,” said Sam Minutello, tournament director for the event. “For serious players, we have a great main-event buy-in and structure, and for more recreational players, we have affordable nightly events that will let them be a part of the action and maybe even take a shot at the main. And we were also able to work in some mixed games for players who enjoy PLO, stud and Omaha.”

At the all-inclusive Hard Rock in the popular resort area of Punta Cana, everything is included in the deeply discounted $266 a night Ante Up rate, including a split-level suite with double Jacuzzi and stocked mini bar, gourmet dining at nine restaurants and room service, top-shelf liquor, land sports and fitness center, daily and nightly activities and entertainment, wi-fi, airport shuttle and gratuities.

Guests also get a resort credit of $350-$750, depending on their length of stay, that can be used for the spa and golf course. The resort features a full casino and sportsbook, decorated with rock-and-roll memorabilia.

“The Ante Up Poker Tour World Championship will be the perfect event for tournament grinders to relax at after the World Series, as well as for recreational players and families looking for a summer vacation before school start for the year,” Long said. “The resort is offering Ante Up players a phenomenal value for their money, and Sam has designed a tournament schedule with events for players of all bankrolls.”