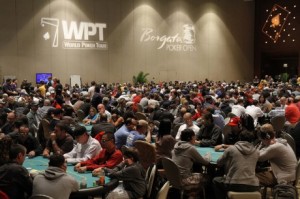 “I feel unbelievable,” said Abulencia, the 33-year-old owner of a janitorial service who is now the proud owner of a championship bracelet and trophy.  “It was a good rush.  I’m stoked.”

Abulencia said he’ll spend some of the money to take his family on vacation to Florida in December.

In other Dover Downs news, the poker room has began an Ante Up Poker League, and the player with the most points on Dec. 12 will win an Ante Up Poker Cruise package and a personalized champion’s jacket. And there’s still plenty of time to join.

Players earn points in the Wednesday 7 p.m. tournaments until Dec. 12, earning two points for playing a tournament, and players who cash earn bonus points based on their finish in the event and the number of entrants. Details are available in the poker room.

The top player wins a superior oceanview Ante Up Poker Cruise package for two for the Feb. 4 sailing, a personalized Ante Up league champion jacket and will have their photo printed in Ante Up.
For more information, visit doverdowns.com or call (302) 857-3275. For more information on the Ante Up Poker Cruise, visit anteupcruises.com or call (727) 331-4335.

Poker rooms around the country are invited to participate in the Ante Up Poker League, which allows players to compete on a regular basis to earn points toward winning an Ante Up Poker Cruise package and champion’s jacket. Poker rooms interested in this should contact Scott Long at (727) 331-4335.

WORLD RECORD AT DELAWARE PARK: Delaware Park set a record for the longest continuous poker tournament. The casino hosted the IronMan Challenge on Aug. 25-27, setting the record at 36 hours, 34 minutes. Peter Konas of the Czech Republic won the event for $27,160.

MARYLAND: The Maryland legislature passed a referendum to be voted on in the Nov. 6 election that would allow for table games (including poker) to be played at the casinos in the state. Question 7 on the ballot would also allow for an additional casino to be built in Prince Georges County. If the referendum is passed there could be poker at six casinos throughout Maryland. Specifically, the ballot question reads as follows:

Be sure to get out and vote!

— Michael Young is the Ante Up Ambassador for the Mid-Atlantic area. Email him at anteupmike@gmail.com.