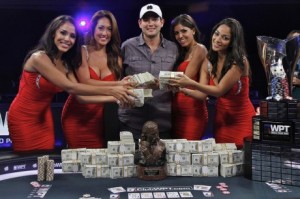 It’s worth noting that Araya, Burford and Sanders made the final table of the 2012 WSOPC Choctaw Main Event final table, with Araya taking home the win.

Kroon was the bubble boy and lost all his chips in a tough spot. His elimination came on the second round of round-for-round play. He went to a

flop with Pete Rios and following a check-raise from Rios, Kroon moved all in. Rios called holding

. The turn cemented Kroon’s fate when it brought the

The bubble burst with two minutes in the level before the dinner break. When the field returned from dinner, action sped up and within the first couple of hands, nine players busted. The field was trimmed from 45 players to 13 in five levels.

Caufman Talley, the chip leader going into Sunday’s day of play bowed out in 18th place. In the hand that crippled his stack, he was up against Jay Diaz in a kings versus aces preflop showdown. Diaz’s aces held and Talley lost around 400,000. Talley never really recovered from the blow and was eliminated shortly thereafter.

Cards will be in the air on Monday for Day-3 action at 1200 CST (1800 BST). A winner will be crowned on Monday and you can follow all of the action on PokerNews.com.