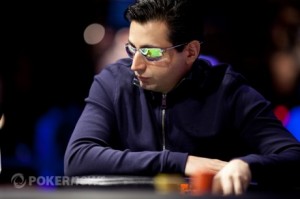 The 2012 World Poker Tour Borgata Poker Open held Day 3 on Wednesday with 174 players remaining from the starting field of 1,181. The money line was set at 110 players, and not only did the bubble burst on Day 3, but the field was whittled down to 27 competitors. At the end of play, Patrick Eskandar topped the field with a stack of 2.972 million in chips.

Eskandar is most famous for his deep run in the 2010 World Series of Poker Main Event. He was one of many characters playing things up to the cameras during the event, which garnered him plenty of air time en route to a 20th-place finish worth $317,161. Since then, Eskandar’s best result came in a WPT event of October that same year when he took 49th in the Festa Al Lago Championship Event in Las Vegas.

For the field to earn some return on their investment, 64 players needed to fall and the casualties began to pile up fast. Some of the notables who were eliminated short of the money included Barry Greenstein, Darren Elias, Matt Glantz, Josh Brikis and Alexander Queen.

Following those eliminations, the field got down to just 112 players — two off the money. Defending champion Bobby Oboodi was one of the shorter stacks in the room and moved all in from under the gun for his last 50,000, according to the WPT Live Updates team. The blinds were in Level 20 at 4,000/8,000/500 and the small blind made the call after waking up to the

. Oboodi was in a world of trouble with the

. After a flop, turn, and river ran out

, Oboodi’s title-defense run came to an end two spots away from the money.

With Oboodi out in 112th place, only one more player needed to head home before everyone else locked up $7,070. The unfortunate soul relegated to the rail as the last empty-handed player proved to be Albert Smith.

It was reported that Smith was all in preflop with

. As you can see, Smith got his money in good, but things ended up bad. The flop came out

before the dealer placed the

on the turn and gave Lee the lead. Smith needed a king on the river, but didn’t find it when the

peeled off and sent him packing.

After Smith’s bubble-bursting exit, plenty of players began to form a line at the payout desk. Of those who busted in the money were former WPT Borgata champion Dwyte Pilgrim, Kurt Jewell, Shawn Busse, Frank Vizza, David Pham, Orson Young, Irv Gotti, Allen Cunningham and Mukul Pahuja. The WPT’s own Tony Dunst also placed in the money, finishing in 64th place for $8,762.

The last two eliminations on the day were Ariel Albilia and Ari Eibhum. Eibhum was the last to go before play ceased for the night after his pocket jacks fell to the pocket kings of Tyler Patterson.

With Eskandar in the lead, he’s going to have to fend off a tough group of players nipping not too far behind. Former WPT champion Steve Brecher is in third place with 2.463 million, David Diaz in is fourth place with 1.96 million, Vinny Pahuja is in eighth place with 1.67 million, Jeff Williams sits in ninth place with 1.487 million and Lee Childs rounds out the top 10 with 1.469 million. Outside of them, Kyle Bowker, Matt Brady, Todd Terry and Jean "Prince" Gaspard[/b] are also still in the running.

Day 4 will commence at 1200 EDT (1700 BST) on Thursday and you can be sure to find the end-of-day recap right here on PokerNews following play.

Data and photo courtesy of WorldPokerTour.com.