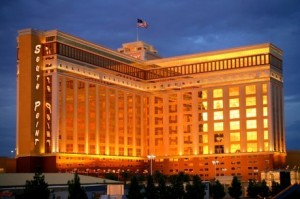 Lemke is a World Series of Poker gold-bracelet winner from 2009 who has performed well over the years in Atlantic City. One of the hands he won came toward the end of the night when he picked off a bluff with queen high. On a board of

was beat and Lemke scooped in the pot.

Eight levels were played out on Day 1b, leaving plenty of action on the felt. It also meant that there would be a fair number of causalities throughout the day, and some of those casualties belonged to notable players. Among those to hit the rail were Barry Shulman, Christian Harder, Allen Bari, Chris Klodnicki, Maurice Hawkins and Mike Beasley.

Also eliminated on Day 1b was Amanda Musumeci. According to the WPT Live Updates squad, Musumeci went out during Level 7 with the blinds at 200/400/50. She opened with a raise to 925 preflop and found calls from the players in the hijack seat, the cutoff seat and the small blind. The player in the big blind put in a reraise to 5,500 and then Musumeci moved all in for 19,700. The player in the hijack seat decided to make the call, and everyone else folded. Musumeci was all-in with

, but was crushed by her opponent’s

. Following a run out of

, Musumeci headed out the door.

Of those advancing out of Day 1b to Day 2 were Kyle Bowker, David Pham, Jonathan Little, Matt Brady, Matt Glantz, Jean “Prince” Gaspard and Joe Serock. Matthew Salsberg, newly-crowned WPT champion from the Grand Prix de Paris, also made the trip back to the United States to get in on the action and bagged up over 100,000 in chips.

Josh Brikis, Joe Cada, Jesse Sylvia, Theo Tran, Amnon Filippi, Irv Gotti and Jeff Gross have also moved on and will be back for Day 2 on Tuesday.

Speaking of Day 2, the action will kick off at 1200 EDT (1700 BST) and the 465 Day 1b survivors will combine with the 200 Day 1a survivors for another great day of poker. Be sure to stay tuned to PokerNews for the daily recap and the progress toward another WPT champion takes places.

Data and photo courtesy of WorldPokerTour.com.