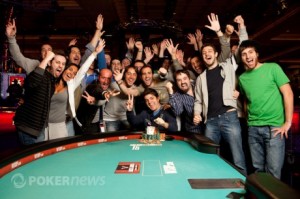 On Monday, the World Series of Poker unveiled the schedule for the 2012-13 WSOP Circuit. The ninth season of the circuit will feature a record 20 stops across North America with buy-ins ranging from $365 to $1,675.

For the first time ever, the circuit will reach into Canada with a stop at River Rock Casino in Vancouver, British Columbia. Additional new stops during the 2012-13 season include the brand new Horseshoe Cleveland, Foxwoods Resort Casino in Connecticut, and Harrah’s Cherokee in Cherokee, NC.

“We’re coming off the best year of participation in the history of the WSOP Circuit and the addition of these new markets really brings our vision to life,” said WSOP Executive Director Ty Stewart. "We want to have the No. 1 regional tour to go alongside the number one super event in poker. We believe we have the best offering in terms of value and ROI at these stakes and the most exciting championship format."

The World Series of Poker Circuit Events Presented by Southern Comfort 100 Proof will begin August 9 at IP Casino Resort & Spa with a 12-ring event schedule, highlighted by the Main Event on Saturday, Aug. 18. Each circuit stop concludes with a $1,675 buy-in Main Event Championship, all of which will have a re-entry option for players who bust during the first flight of Day 1.

Every WSOP Circuit Main Event winner will receive an automatic berth into the Southern Comfort 100 World Series of Poker National Championship. Automatic bids will also go to the player at each stop who accumulates the most points throughout the 12-event gold ring schedule. The National Championship has been moved from Las Vegas to New Orleans and will run from May 21 through 23.

Here’s a look at the full schedule for the 2012-13 World Series of Poker Circuit:

For more information on the 2012-13 WSOP Circuit season, visit WSOP.com.