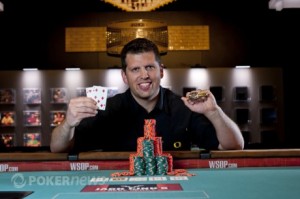 I had a chance to speak with Greg Raymer during the recent Heartland Poker Tour stop in St. Louis. Raymer, a 1982 graduate of Parkway South High in St. Louis County, still has friends in the area.
Despite his highlight of winning the World Series of Poker Main Event, Raymer holds a long-term view on success.

“Poker is a game of 100 percent skill; it’s just you have to wait for the long run to know who is the most skillful,” he said. “I don’t use words like luck in the sense of an aura or entity that is luck. It’s a way of saying that today variance was not in my favor.”

I asked what he thought of the live-hand analysis in WSOP streaming coverage.

“There was very good analysis. The hands they thought the players might have, were the most sensible for them to be holding.”

And does that help the viewers better understand hand ranges? “Good players hear that and get better, but bad players, unless they are active in trying to get better, it’s just going to blow right over their heads,” he said.

“We are excited to have Greg doing a seminar at Lumiere and should bring a lot of new players into the St. Louis area,” Lumiere poker room manager Anthony Chester said. Contact the poker room for details at (314) 881-7569.

The training event will have a morning lecture and live-hand labs in the afternoon. One problem Raymer sees is a player having too narrow of a range for opponents’ hands.

“You don’t put someone on one hand. You have to think about all the hands he might have and how he might play those,” he said.

In the hand-play section of the seminar, players will work through hands and analyze play from each position.

“The point is not to play poker, but to learn poker,” he said.