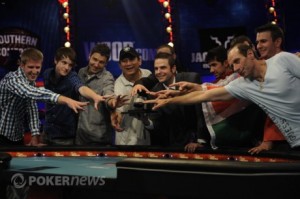 The Upper Midwest is an outdoorsman’s paradise. But after a peaceful day on the lake catching walleyes and bass, you’ll be pleasantly surprised by the abundance of great poker you’ll find in Minnesota, Wisconsin and Iowa.

The state is known as the “Land of 10,000 Lakes,” but in the poker world, it could easily be described as the “Land of 10,000 Limit Games.” Yes, while the rest of the world has seemingly given up on the strategic nature of limit poker, Minnesota has fostered some of the best limit games in the country thanks to a $60 bet limit imposed by state lawmakers. That limit is now $100, opening the door for a game closer to no-limit, at least for low-limit grinders, but do yourself a favor and take a chance on limit. You might find you like it. The new law also greatly expands capacity for poker tournaments, so expect to see increased action in the future.

Canterbury Park | 952.445.6870
canterburypark.com | @canterburypoker
The largest poker room in the North Star State is just south of Minneapolis and home to the Fall Poker Classic, a two-week-long tournament series that concludes with a $1,100 buy-in main event, as well as several other series throughout the year. Up to three tournaments are run daily in the room, including the unique “Survival Tournaments,” where players play up to three hours depending on the event and earn a percentage of the prize pool based on the amount of chips they have at the end of play. Tableside dining and massages are available, and private games can be accommodated. Players can earn $1.50 per hour on their MVP card for live-game play and a bad-beat jackpot is offered.

Northern Lights | 218.547.2744
northernlightscasino.com | @norlightscasino
The Walker poker room features tournaments most days of the week, starting at as little as $5. High-hand promotions run most days, too, with quads or better always earning $25. Mondays, Wednesdays and Thursdays feature gold-chip promotions, where players earn money for winning the most hands during certain time periods.

Running Aces | 651.925.4569
runningacesharness.com | @runaces
This large room just north of Minneapolis features daily $50 tournaments ($70 on Fridays and Saturdays) and several series and bigger events throughout the year. The top-five tournament players each week share $1,500. Cash-game players will want to be there during select hours on Mondays and Wednesdays, when players earn $10 an hour for live play and get discounts on food and beer.
Players also earn $5 an hour around the clock Monday-Thursday in select games. Aces Cracked and other promotions are scheduled throughout the week. Tableside massages and beginner lessons and tables are offered.

Shooting Star Casino | 218.935.2711
starcasino.com | @sscasino
The Mahnomen casino offers tournaments on Fridays, Saturdays and Sundays with $35-$60 buy-ins, plus a Tuesday night event where women get a discount and one man and one woman are chosen to win a free entry in a future tournament. A monthly freeroll is held for players who log at least 45 hours of live play. For cash players, high-hand promotions are twice a day on Mondays and Wednesdays, and players who open the poker room each of those days get $25. An escalating bonus-hand promotion is offered on Tuesdays and Thursdays.

Treasure Island | 800.222.7077
treasureislandcasino.com
The Welch casino touts the easiest bad-beat qualifying hand (aces full of eights) and a $4 max rake. On Mondays, players earn $5 per hour from 9 p.m. until 1 a.m. Aces Cracked promotions run from 10 p.m. to close on Sunday nights and 10 a.m. to 6 p.m. on Thursdays. A 50-plus drawing is held Wednesdays. Tournaments are three days a week, and the first Friday of each month features a Poker Gone Wild event with a joker added to the deck. Private tournaments are offered.

Ho-Chunk Gaming Wisconsin Dells | 800.746.2486
ho-chunkgaming.com/wisconsinde lls
This Baraboo poker room is the largest of three in the Ho-Chunk family (Nekoosa has three tables and tournaments and Madison is an all-PokerPro table facility — with an impressive player lounge — in the middle of a dispute with the state that may force its closure). Wisconsin Dells runs $55 events Tuesdays, Thursdays and Sundays, with cash-game promotions all days. If you’re looking for a specific game, they schedule those so you know what day to come looking for it, such as Omaha/8 on Fridays and round-by-round games on Thursdays and Saturdays.

Menominee | 800.343.7778
menomineecasinoresort.com
The Keshena poker room offers tournaments every Friday, Saturday and Sunday with buy-ins ranging from $35-$50 with tournament series throughout the year. Cash players earn $25-$150 for cracked aces depending on the suits, and rake is 10 percent to $3 on Sundays until the fall.

Potawatomi Bingo Casino | 800.729.7244
paysbig.com
Wisconsin’s largest room (20 tables) is found in the heart of Milwaukee, and offers $110 tournaments on Sundays and Mondays and hosts bigger series, including a World Poker Tour Regional that began July 29 and featured a bounty on WPT host Vince Van Patten. New poker room manager Jeff Gemini is working on promotions and events for the room. Don’t miss the extra large Omaha table, custom-built to give those players a little extra room.

Don’t be fooled by the tired cliche of corn, corn and more corn. Iowa is proud of its maize, no doubt, but there’s plenty more to do in the state than shuck ears. Poker is big business in the state, which has been among the pioneers in trying to regulate intrastate poker. The countryside is dotted with a dozen poker rooms with a variety of action.

Diamond Jo Casino | 641.323.7777
diamondjoworth.com
The Northwood poker room, not far from the crash site of Buddy Holly’s plane, has a bad-beat jackpot for cash games, but is big on tournaments. Multitable events are Tuesdays, Thursdays, Saturdays and Sundays, with unique features such as bounties, beat the boss and super stacks.

Grand Falls Resort | 712.777.7777
grandfallscasinoresort.com | @Grand_Falls
The eight-table room in Larchwood, close to the Sioux Falls, S.D., metro area, is the newest resort in the state. The poker room puts a premium on tournaments, with events every day of the week except Wednesdays and Fridays. Buy-ins are $40-$100, and Tuesday’s tournament is Omaha/8.

Horseshoe Council Bluffs | 877.771.7463
horseshoecouncilbluffs.com | @HorseshoeIowa
The 18-table room in Council Bluffs, part of the Omaha, Neb., metro area, is the largest in the state. It runs a successful World Series of Poker Circuit event each year, as well as other tournament series, such as this month’s Horseshoe Poker Classic. Andrew Brock is the new manager, and he promises player-friendly rules, better promotions and new buy-ins for no-limit hold’em games. Tournaments are daily, with buy-ins of $45-$75, with a $235 buy-in “fat stack” once a month. Cash games feature high-hand and super jackpots, as well as Aces Cracked during certain hours. The room’s games will be listed on the Bravo Live app, and players will soon be able to swipe in at the table.

Meskwaki Bingo Casino | 800.728.4263
meskwaki.com
Joe Fernandez recently took over this bustling 15-table room in Tama and is hard at work on new promotions and events. Tournaments get great attention in this room, with $20-$45 buy-ins every day except Monday and Friday. The room hosts regular Mid-States Poker Tour events, and cash games feature a bad-beat jackpot.

Mystique Casino | 563.582.3647
dgpc.com | @MystiqueCasino
Tournaments are big in this four-table room in Dubuque, with events every Tuesday, Thursday, Friday and Sunday. Buy-ins are $30-$60, and the Thursday event is the Budweiser Wise Guy, where players earn points for the Budweiser Wise Guy Championship. For cash players, a straight-flush progressive is offered with increasing payouts.

Prairie Meadows | 800.325.9015
prairiemeadows.com | @PrairieMeadows
This Altoona room, near Des Moines, is about to be renovated to match the look and the feel of the recently completed attached hotel. The poker room is on the clubhouse level, away from the dinging of slot machines, and features tournaments Sunday, Tuesday and Wednesday with buy-ins of $30-$60, and the Heartland Poker Tour is scheduled to have an event this fall.
Free poker lessons are offered at 6 p.m. on Sundays, and cash players have a shot at a bad-beat jackpot. A $5-$10-$20 PLO game runs Mondays and Thursdays, and a $6-$12 limit Omaha/8 half-kill game goes Wednesdays and Fridays.

Riverside Casino & Resort | 877.677.3456
riversidecasinoandresort.com
The Riverside room, just south of Iowa City, will host the Riverside Poker Classic on Sept. 1-2 (qualifying events begin this month). To hone your skills before the event, play in the several daily tournaments where starting stacks recently were increased. An Omaha event is on Mondays, a bounty event Wednesdays, a freezout on Thursdays and a deepstack on Saturdays. The regular Sunday tournament is on hold through the Poker Classic, but qualifying events for the championship take its place on the schedule. S

Go to anteupmagazine.com and click the Where to Play tab for more info.