Catching up with the Midwest out West 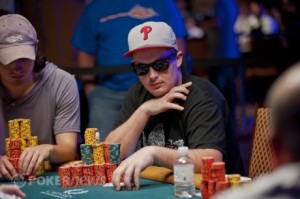 With so many recognizable names at the final tables, it was hard not to get excited during this year’s World Series of Poker. Yet more exciting is to see some of local players from the Midwest make it deep in several of the events, including one familiar face to Ante Up readers.

Benjamin Grise, a Ball State grad from Muncie, Ind., took home nearly $49K after his straight-flush gutshot draw didn’t get there. He finished eighth out of 3,321 entrants in Event 54 ($1K no-limit hold’em).

HORSESHOE POKER CLASSIC: With nine events, more than 800 players and $212K in prize pools, this year’s Horseshoe Poker Classic at the Horseshoe Casino in Southern Indiana proved there was plenty of tournament action for those who weren’t able to make the pilgrimage to Las Vegas for the WSOP.

The $750 main event, which attracted 92 players for a $65,800 prize pool, ended with a five-way chop, awarding $9,187 each to John Ford (Louisville), Scott Gullett (Prospect, Ky.), Frederick Liggin (Louisville), Joseph Mattingly (Springfield, Ky.) and Craig Spalding (Evansville, Ind.). The biggest win of the series went to Kevin Cook of Greenwood, Ind., who beat 210 entrants in the $200 kickoff event for more than $14K.