A look at the ever-changing world of Vegas poker 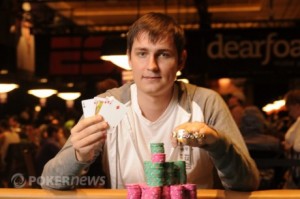 When it comes to Las Vegas, nothing seems to stay in place. Whether it’s a restaurant you want to try or a casino you want to visit, everything may be gone when you get there. This same ever-changing mentality of Las Vegas is true not only in the casinos, but in the poker rooms, especially when it comes to personnel.

A recent flurry of management changes have swept the Las Vegas poker world, with some long-term veterans leaving, giving opportunities to many others from the industry. For many years, Donna Harris ran the poker room at Mirage. Once she left the Mirage a few years back, she went on to run the Wynn poker room, replacing the original opener of the Wynn, Deborah Giardina. Recently, Joe Vigurs took over the helm at the Wynn.

The Palms poker room has gone through more changes than any other room recently, having been taken over by Cantor Gaming and moved to the race and sports book (also run by Cantor). Long-term poker veteran Bobby Griffiths is running the new room and staff after taking over the short-term opening manager Brad Thomte, who had just left Binion’s to run the Palms.

Christina Sharkady, a wonderful former World Series of Poker dealer and cardroom manager, decided to leave the Riviera and accept a floor position at Hard Rock under the direction of James Klotsky.

A favorite small room of many, the Treasure Island poker room, saw Troy Horning step down as manager and leave the industry to spend time with his family. Former TI dealer and supervisor Kurt Browning replaced Horning, earning the promotion after several years with TI.

One poker room that’s susceptible to constant change is at Tropicana. Just recently reopening last year with Wally Wormer at the helm, the room has seen significant changes over time. Womer was replaced by Nick Gullo, who was replaced by Eldon Brown. After opening the room, Wormer decided to return to Aliante Station, where he had come from before accepting the Tropicana’s position. Gullo is a Las Vegas veteran, and at one time ran the poker room at the Aladdin (now Planet Hollywood). He left Tropicana and continues to enjoy his semi-retirement. He came back out of retirement to work the floor in the satellite area of the World Series of Poker at the Rio this summer.

Along with the management changes all across town, some small rooms are seeing changes, too. Three rooms have closed. The poker room at Tuscany closed a few months ago after recently reopening. Also, the Silverton decided to close its room, leaving M Resort and South Point to capture the market on the south side of Las Vegas.

O’Sheas poker room said its tearful goodbye recently, with the staff relocated to other Caesars Entertainment properties. The entire O’Sheas casino was shut down and has since been gutted so Caesars can move forward with Project Linx, a new retail and entertainment complex at the center of the Strip. The Imperial Palace has been strongly affected by this remodeling, and the poker room has moved upstairs, in the former karaoke lounge area, near Burger Palace. The IP poker room continues to offer a popular mixed game every Sunday night at 7 (started in 2008 by me).

Though some rooms have closed, a new room has opened. On July 1, Ellis Island, a popular and tiny locals casino on Koval Lane (east of the Strip), opened a two-table poker room within the area of its sports book. This casino is perhaps best known for its steak special and operating an in-house microbrewery.

Probably the most exciting change to the Las Vegas poker world, however, has been the high increase in game variety. Not more than one year ago, a player would be hard-pressed to find more than the $3-$6 mix at Imperial Palace and the $40-$80 mixed at Bellagio if they desired something other than continuous NLHE. In the past year, mixed games and other non-hold’em games are being seen consistently spread at many places throughout Las Vegas.

Pot-limit Omaha is a daily offering on the Strip, which was unheard of not more than a few years ago. It’s most often found at Aria and Venetian, with daily games running nearly 24-7. Of course, we all know Orleans is the most consistent $4-$8 Omaha/8 game in town, but now the Venetian gets it every day, all day, and has been for quite some time.

Limit Omaha used to be the exclusive game of Boulder Station, but now South Point and the M Resort are getting the game daily, often with a good-sized waiting list. Low-limit mixed games are seemingly becoming all the rage, as Aria, MGM Grand and even Bellagio have been seen spreading mixed games in the $4-$8 and $6-$12 variety.

With the constant changes that the city of Las Vegas provides to everyone, it’s certainly no surprise the poker scene changes along with it. Next time you’re in Las Vegas enjoying a poker room or dining in a favorite restaurant, make sure you take a picture, as it may last longer.