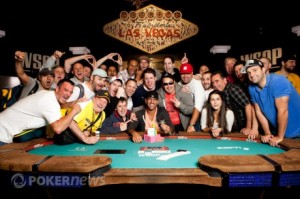 On July 7, the 2012 World Series of Poker Main Event got under way and eventually 6,598 players entered for their shots at poker immortality. After seven long days of play, the final nine have been decided. The 2012 World Series of Poker Final Table is led by Jesse Sylvia with 43,875,000 in chips. But he’ll need to collect nearly 198,000,000 chips to take home the title.

Sylvia leads a field of somewhat lesser-known poker players, almost all American and all male. That was almost not the case. Even though only 3 percent of the field were female, there were two women still in contention as Day 7 began — Gaelle Baumann from France and Elisabeth Hille from Norway. They remained in the field until only 11 players left, but then both were eliminated back-to-back and the possibility of a woman, let alone two, making the Main Event final table ended.

There were just 27 players remaining at the start of the day. Denmark’s Nicco Maag came into Day 7 as the shortest stack with just over 10 times the big blind. He moved all in early in the day with

only to find a caller in Russell Thomas holding

It looked as if the players were going out in reverse order when Paul Volpe, who had started the day with the second shortest stack, was all-in shortly after Maag’s elimination. But Volpe was ahead pocket jacks versus pocket fives and the jacks held, giving him a timely double up. Instead, Germany’s Jan Heitmann was out next in 26th place when he pushed with sixes and was called by Daniel Strelitz with eights.

There was a flurry of all-ins at the start of Level 31 with no bust outs. The biggest hand of the level took place between Greg Merson and Cylus Watson. After a raising war, all the chips were in the middle with Watson holding

. After the board was spread out

Merson doubled up to over 14 million and Watson was left with less than 1 million and was later knocked out in 22nd place for $294,601.

Roland Israelashvili (25th), Daniel Strelitz (24th) (who went from second in chips at the start of the day to out by the second level) and Yuval Bronshtein (23rd) were eliminated in rapid succession before the short-stacked Watson, followed by Robert Corcione (21st), Paul Volpe (20th) and Jamie Robbins (19th), each taking home $294,601. This was Robbins’ second trip to Day 7, having finished 11th in the 2009 Main Event. With Robbins’ elimination, there was a table redraw for the final two tables.

Volpe’s last hand was the first of Level 31. In that hand, Steven Gee open-shoved from the cutoff for around 4 million, Danny Wong reraised all-in from the button for just under 8 million, and Volpe called from the small blind with his last 3.5 million. Volpe’s

was up against Gee’s

, but gave Gee an open-ended straight draw. The

turn changed nothing, but the river

Making it to the final 18 meant another pay jump, and the next three eliminated (David Balkin (18th), Robert Buckenmayer (17th) and Percy Mahatan (16th)) each took home $369,026. The final 15 went on a 90-minute dinner break, then returned to battle down to the final table.

Wilfried Harig hit a miracle double-up early in Day 7 when he was all-in with pocket sixes against Greg Merson’s pocket queens and he spiked a six on the river. Just after the dinner break, Merson finally turned the tables and sent Harig to the rail by cracking his aces. Harig pushed his short stack all in with

and Merson made the call with

. Merson caught a pair on the

flop but Harig was still ahead, until the turn came the

Earlier in the day, during Level 31, Jesse Sylvia narrowly escaped being on the wrong end of an ugly suck out to avoid elimination. He had called Merson’s preflop all-in with pocket aces and was ahead of Merson’s

turn. But just as quickly as Merson had taken the lead, the river came the

and Sylvia had rivered a full house to double up to 8 million. From that point on, he kept on the upswing and by the time it was down to 14, he was the chip leader with 24.45 million, just ahead of Russell Thomas and his 24.28 million.

In the last hand of Level 32, Wong was knocked all the way down to around three big blinds after his

was flushed down the river by Andras Koroknai’s

could not outrun Merson’s

The two remaining females in the field faced off against each other with Baumann all in against Hille, pocket fours versus

. Baumann survived to double up as the board ran out

, leaving two women still in the field, although both now short-stacked. The next to exit the tournament was former start-of-the-day chip leader Marc Ladouceur.

Ladouceur had lost about 9 million in a brutal hand against an all-in Andras Koroknai as the second hour of Level 33 got under way. In what should have been a harmless chop, Ladouceur was holding

. But when the board ran out with four successive clubs, Ladouceur was down to 5 million. Later on in the level, Ladouceur was in another hard-to-believe hand. He was all-in preflop with

and was called by Merson holding

. The flop hit both of them, but Merson the hardest, coming an unbelievable

. No help to Ladouceur on the

Out in 12th place was Scott Abrams ($590,442), leaving two women in the field with just two eliminations left before the final table. Unfortunately for those waiting to see history being made, Elisabeth Hille fell just two spots shy of making the final table when she pushed with her short stack holding

and was called by Koroknai with pocket sevens. The flop was no help, coming

river was no help, and Hille ended her phenomenal run in 11th place ($590,442), leaving Baumann as the last woman standing.

Down to the unofficial final table of 10, Sylvia was the chip leader with over 48 million and Baumann was the short-stack with around 2 million with blinds at 150,000/300,000. She more than doubled up when she found pocket kings and Merson had no choice but to call her with

. Baumann had a bit of a sweat as the flop came

and the turn was the

river moved her up to almost 5 million.

But Baumann was able to ride out the short stack for only so long. In the end, Koroknai, with whom she had shared a controversial hand back on Day 2, knocked her out when his

held up against her

Jesse Sylvia will be the chip leader going into the final table, with 15 million more than his closest rival, Andras Koroknai. Currently in third place is Greg Merson, who won Event #57: $10,000 No Limit Hold’em — Six Handed just over a week ago. By making the Main Event final table, Merson has picked up enough points to propel him to the top of the WSOP Player of the Year standings, ahead of Phil Ivey. The only other previous bracelet winner still in the field is Steven Gee, who has experience with large fields and multiple days, having outlasted a field of 3,042 to with Event #13 $1,000 NLHE in 2010. Short-stacked Jeremy Ausmus has eight prior cashes this year and 13 lifetime, but the $754,798 minimum payday he is guaranteed for making the final table far eclipses his combined WSOP earnings.

The nine finalists will return to the Penn & Teller Theater at the Rio on Oct. 28 to play for the bracelet and $8.7 million.

To follow all of the emotional ups and downs of Day 7, including hand-to-hand play from the unofficial final table, check out our live reporting blog for all the action.

Find out more about the final nine of the 2012 World Series of Poker.