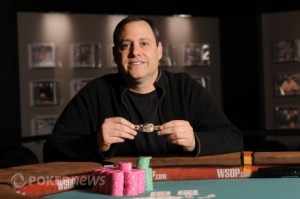 When Day 6 began, many notable players were still in the field, but most failed to make it to the end. Among those eliminated throughout the day were Amnon Philippi, Sam Holden, David "ODB" Baker, A.J. Jejelowo, Jason Somerville, Vanessa Selbst, Eric Buchman, Isaac Baron, Erik Cajelais and Gavin Smith.

Five women were still in the race to make it to the Main Event final table, but only two survived: Elizabeth Hille and Gaelle Baumann. Vanessa Selbst was knocked out in 73rd place for $88,070. Her chip stack was crippled early in the day when she called the all-in of David Balkin with

hit a set on the

flop. She managed to chip back up close to her starting stack, then she moved all in on the button and was called by Greg Merson from the big blind. Selbst had

and was behind Merson’s

put her ahead, but gave Merson a flush draw to go with his other outs. He gained even more outs on the

turn, and one of those was the

that fell on the river.

Jason Somerville was eliminated soon after Selbst. He survived an all-in when his nines cracked Eric Buchman’s tens. But his luck ran out against Jacob Balsiger. In his final hand, Somerville raised to 105,000 from middle position and Balsiger moved all in from the big blind. Somerville quickly called off for 840,000 and was way ahead

until the flop came

. Somerville needed one of the last two queens in the deck to stay alive, but the board ran out

The last November Niner left in the field, Sam Holden, was unable to make back-to-back final tables. In his last hand, Andras Koroknai had opened to 125,000 from middle position, and Holden went all-in for about 1.3 million from the cut-off seat. Koroknai called and cards revealed, Holden looked to be in great shape,

. But the flop came

and Koroknai took the lead in the hand and when the board ran out,

Amit Makhija shot up to the top after knocking out A.J. Jejelowo, then saw his chip stack take a hit after being bluffed by Ladouceur in a massive pot. In his last hand, he was all-in and behind in a three-way pot, ace-king, to the pocket aces of Scott Abrams and the pocket tens of Tristan Clemencon. The aces held and Makhija and Clemencon were out in 47th and 46th place, respectively, for $156,293.

Baumann was able to pick up two huge pots late in the day to push her back toward the top of the chip counts. In the first, she had check-called David Balkin all the way to his all-in bet on the river of a board reading

. Balkin turned over pocket tens for a flopped set but Baumann had

for a rivered flush, and she was up over 4 million and he was down to just over 1 million.Then, near the end of the day, she picked up more chips courtesy of Wilfried Haerig pocket eights versus

board. She finished the day on a downward trend, bagging a below-average 5,530,000, while the other remaining female player, Hille, is in fifth place going into Day 7 with a healthy stack of 9,770,000.

Monday will be full of huge swings in emotions and perhaps chip stacks as play moves toward the final table, and PokerNews will be bringing you all the action. Make sure you do not miss a minute of our wall-to-wall coverage by following our live reporting blog for all the details.

In the Video of the Day, Kristy Arnett caught up with Norway’s Elisabeth Hille and asked her about the idea of being the last woman standing. They also talk tough tables, trying not to make any more mistakes, and staying focused. Get to know one of the possible members of the 2012 WSOP Main Event final table by checking out the video below.