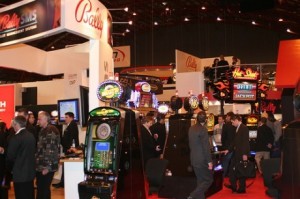 Day 4 of the 2012 World Series of Poker Main Event began with 720 hopefuls sitting just a few dozen spots away from the money bubble. Many saw their series come to an end throughout the day, but several big names were among the 282 that advanced to Day 5.

In one of the final hands of the day, Volpe and Eric Pratt got involved in a preflop raising war which saw Volpe five-bet shove and Pratt call off his entire 631,000-chip stack. Volpe was holding the

while Pratt held the

keeping Volpe in the lead. The

on the turn changed nothing, but the

on the river Pratt a pair of aces and the double-up. Volpe took it in stride and still finished the day as the leader.

While Volpe and several others thrived on Day 4, many others hit the rail after the money bubble burst at 666 players. Among them were Big One for One Drop champion Antonio Esfandiari, Chris Moorman, Roberto Luongo, Liv Boeree, Jason Mercier, Maria Ho, JC Tran, Huck Seed, and Johnny Chan.

There were also some delays in play, including an incident involving pepper spray, as well as a payout issue. Players were only able to get four levels in, there was still lots of action.

The day got off to a quick start with the money bubble quickly approaching, and before you could think twice, hand-for-hand play was already in effect. During the first hand of hand-for-hand play, five players found themselves all-in, and four were eliminated. On one of the bubble hands, Roberto Riva made it 11,000 from under the gun only to have Desmond Portano three-bet to 32,000 from middle position. Riva moved all in with a covering stack and the pressure was on Portano, who went into the tank. Finally, after Riva called the clock, Portano put his chips in with

and was behind, but not for long. The flop fell

to give Riva the commanding lead. The turn was the

to give Portano a flush draw, but the

on the river was a brick, making Portano one of the four bubble boys.

The other three bubble players were Steve Rosen, who ran

couldn’t hold up against

; and David Kelly, who shoved

Eliminated not long after the money bubble was burst was Antonio Esfandiari, who was short-stacked after running his

. On Esfandiari’s final hand, he found himself all in holding

and Esfandiari couldn’t catch up to stay alive. He was sent home in 501st place, collecting $24,808, a small payday compared to his recent $18 million score.

Also hitting the rail Friday was NHL goalie Roberto Luongo, who got his chips in with

. He was unable to catch up and was eliminated, collecting a small payday. Another player to hit the rail Friday was Johnny Chan, who also shoved a small pair into his opponent’s bigger pair. Chan got all his money in with

but found himself up against Isaac Baron‘s

. Baron flopped quads on the

board, and that was it for Chan. Huck Seed was also eliminated earlier in the day, so Chan’s bustout marked the elimination of the last Main Event Champion still in the field.

Matt Marafioti was at the feature table for most of the day and had a memorable roller coaster ride. At one point, Marafioti was down under 75,000 chips, but he was able to finish the day with 673,000 after cracking aces to double up on one of the last hands of the night. In the hand, Marafioti found himself all in with

. He was in huge trouble, but the flop fell

giving him a shot at survival. The

turn gave him the flush he needed and secured his double up. He shot out of his chair and jumped around the main stage in celebration as the dealer put out the

to complete the board.

Another player who surged after the money bubble, Andrew Lichtenberger was on the winning end of a massive three-way pot late in the day. In the hand, Jeremy Ausmus opened to 17,000 from middle position. Action folded to Filip Verboven who moved all in for 120,000. Lichtenberger cold-called on the button, and Ausmus moved all in. Lichtenberger quickly called with the

, but found himself crushed against Ausmus’

. Verboven was in the worst shape though holding the

. The board was kind to Lichtenberger, though, when it ran out

Here’s a look at the top chip stacks moving into Day 5:

Make sure you don’t miss any of Saturday’s action by following PokerNews’ live reporting blog where we will bring you all the updates you need throughout the day.

In the Video of the Day, Kristy Arnett caught up with Grant “Mister Fish” Hinkle. Hinkle offered some poker tips to players including how to play on the bubble, being patient, and playing with gloves on. To see the whole interview, make sure you check out the video below.