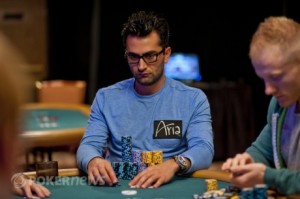 On Day 47 of the 2012 World Series of Poker, the entire surviving field of Main Event entrants was under the same roof for the first time. The remaining 1,765 players sat down together to play five two-hour levels on Day 3 in the Brasilia Room and the Amazon Room at the Rio. By the time the final level of the night was completed, only 720 players remained, with Dave "doubledave22" D’Alesandro and his 1.1 million chip stack leading the way.

Gaelle Baumann was the leader with 505,800 in chips when the day began. She remained at the top of the leaderboard through the first level of play but was passed as her chip stack stayed about the same throughout the day. She finished with 599,000, more than double the average chip stack.

Two-time bracelet winner and Team PokerStars Pro Vanessa Selbst will be back for Day 4, thanks to a very lucky double up late in the day. In the pivotal hand, she check-raised all in for over 200,000 with a board reading

. Her opponent snap-called, turning over

for a flopped set. Selbt tabled

for a gutshot and flush draw semi-bluff. Selbst stood up from her seat, ready to say her goodbyes, and congratulated her opponent on his good call before the dealer turned over the

after the board ran out

. In his last hand, Harrington three-bet all in from the button with

and the original raiser called with

. Harrington failed to improve and he was sent to the rail.

In just two hands, Ben Lamb saw his run for another Main Event final table come to an end. In the first, Lamb had four-bet all in and his shorter-stacked opponent called for 94,600 total. Lamb was in trouble with pocket jacks versus pocket queens, and found no help on the

board. Lamb was down to about a dozen big blinds and, a few hands later, he put them at risk with pocket fives. Chris Moorman called him from the small blind with

. Moorman went ahead on the

flop and stayed there as the board ran out

. Lamb was on his way out of the tournament short of the money.

On Friday, the remaining 720 players from Day 3 of the Main Event will return at 1200 PDT (2000 BST) to the Amazon Room to play five more levels. The first order of business is breaking the money bubble at 666 players. After that, expect the action to really heat up as the remaining players try to build their chip stacks as players pass the halfway point of the Main Event.

PokerNews will be there to cover all the exciting action as we approach the magic number 666 and then as we move from making it to the money to building a big stack for a deep run. We will have all the updates, hands, chip counts, bust-outs and more from the Rio in our live reporting blog, so make to follow our coverage throughout the day.

In the Video of the Day, Lynn Gilmartin talks during the dinner break with Shaun Deeb about his good run so far, his “volatile” table, and the pluses and minuses of sitting at a televised table. Deeb also talked about what he did after winning the $1 million at the One Drop satellite.