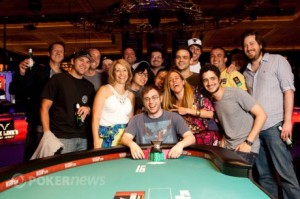 Only nine players returned for the final day of Event #49. Among them there were several heavy hitters, including Mike “Timex” McDonald, WSOP rookie Harrison Gimbel, and Mike Sowers. But walking away with the title was Greg Hobson, who collected $256,691 for his efforts along with his first World Series of Poker gold bracelet.

. Schwartz was able to flop a gutshot straight draw to the nuts, but couldn’t hit it. He was eliminated in ninth place and Hobson moved into an early chip lead.

Sameer Aljanedi was Hobson’s next victim. Aljanedi got all his money in with

but Hobson called him down with the superior

. The flop brought a

and that was enough to seal the deal and send Aljanedi home in eighth place, increasing Hobson’s lead.

McDonald ended up running out of time in sixth place when he was eliminated by John Hayes. McDonald got his money in preflop with

and was called by Hayes’

giving Hayes a huge lead with a set, and the turn brought the

to give Hayes an unbeatable full house. With that, “Timex” was out the door and collected $39,931 for his efforts.

Following McDonald were Eugene Du Plessis, Harrison Gimbel, and John Hayes. Gimble was eliminated when his two pair ran into the higher two pair of Hayes. Hayes fell shortly after that when he shoved all in with

board. Hayes didn’t improve and Sowers and Hobson moved into heads-up play.

The match didn’t last long as Hobson took a quick lead by scooping two monster pots. On the final hand, Sowers moved all in with

and was called by Hobson who was holding

. The board rolled out

and Hobson took down the hand and the tournament.

Here’s a look at the payouts for the final table:

To see an in-depth summary of the final table, or to see hands from earlier in the tournament, make sure you check out the live reporting blog for Event #49.

At the start of the day, 303 players returned from the original 1001 player field to battle it out on the felt for the chance to win a bracelet. Leading the way at the start of the day was Nick Maimone, who came in with 196,000 in chips. Plenty of big names were still left in the field vying for the $952,694 first prize. On Friday, players played down past the money bubble and the day ended with only 48 players.

Among those players to hit the rail before the bubble burst were Terrence Chan, Lee Childs, Andy Frankenberger, Jennifer Harman, and Main Event champions Phil Hellmuth, Jonathan Duhamel, Pius Heinz and Peter Eastgate. The bubble didn’t take long to burst as Alex Gomes hit the rail on the first hand of hand-for-hand play. On his final hand, Gomes was holding

but he ran into the

of Thiago Nishijima. Gomes failed to improve on the flop, turn, or river, and he was sent packing just short of the money.

Joseph Cheong is one player returning tomorrow with a mountain of chips. He was able to narrowly avoid elimination when his opponent only called him down with the third nuts. In the hand, Cheong raised the button to 13,000 and was called by Sami Nasser in the big blind. The flop fell

and Nasser checked as well as Cheong. On the

river, Nasser decided to lead out with his own bet of 37,000. Cheong immediately raised to 81,000 and was quickly called. Cheong showed

for a full house, but Nasser showed him

for an even bigger full house. By some miracle, Cheong still had chips, and he was able to build up a stack of 482,000 by the end of the day.

Still in contention tomorrow are Dan Smith, Tommy Vedes, Jeremy Ausmus, Galen Hall and chip leader Kyle Julius. Also still alive is Konstantin Puchkov, who was able to tie the World Series of Poker record for most cashes in one series with 10. Puchkov is returning Saturday with a below average stack but is still in contention to win it. Action will resume at 1300 PST (2100 BST) and play down until a winner is crowned, or a hard stop is reached late in the night.

Be sure not to miss any of tomorrow’s action and keep your eyes on the live reporting blog.

More than 900 women showed up to play in Event #51 Friday for a chance to be the next World Series of Poker Ladies Champion. At the end of the day, though, more than 800 dreams were shattered, and only 117 players remained. At the top of the pack was Gaelle Baumann, who bagged up 77,300 chips. J.J. Liu also finished near the top of the counts after eliminating the bubble girl to end the night.

In the field Friday was PokerNews’ own Danielle Barille, Kristy Arnett, Sarah Grant, and Lynn Gilmartin. Barille was eliminated early in the day when her

. Gilmartin also hit the rail when her pocket kings fell to pocket tens. The

brought her a flush draw, but it also gave her opponent a set. The turn was the

and the river was the

and it just wasn’t in the cards for Gilmartin. Arnett was eliminated shortly after the dinner break, and that left Sarah Grant as the last woman standing in the PokerNews group. Grant was able to make it past the money bubble and she will return tomorrow with a healthy stack of 33,900 and a nice little payday for her efforts so far.

On the last hand of the night, Liu and Halli Pinson were building a large pot with the board reading

. Pinson moved all in and Liu called with

for a flopped flush. Pinson showed

and needed to hit ace or queen to survive. The river brought the

and that was all she wrote for Pinson.

Make sure you don’t miss a single bustout by following the live reporting blog.

Over 400 players showed up to play 10 games on Friday, but at the end of the day more than half the field was gone. Leading the pack at the end of the day was Tommy Hang, who bagged up 74,000 chips. Also near the top of the chip counts are 2012 bracelet winner Vincent van der Fluit, Bryn Kenney, Dan O’Brien, Hassan Habib, and Noah Boeken, who are all among the top 10 stacks.

Plenty of notables hit the rail on the first day of play, including Shuan Deeb, Martin Staszko, Allen Bari, Jonathan Aguiar, and PokerNews’ very own Remko Rinkema. The word was that several big names were missing from the event because of a scheduling conflict with Event #55: $1,000,000 Big One for One Drop Thus, pros such as Jason Mercier, Phil Ivey, and Daniel Negreanu chose to skip this event.

Aguiar was done in right before the end of the night. During a hand of Badugi, four people were heading to the first draw. Every player drew two cards, except Aguiar who drew one. Everyone checked and it was on to the next draw. On the second draw, Fu Wong and Aguiar drew one, while the other two players drew two. This time Aguiar bet, and all folded except for Wong. On the final draw, Wong drew one and Aguiar stood pat. Wong checked, Aguiar bet, and Wong check raised. “This is too good to fold,” Aguiar said before finally putting in the call. Wong showed

for a seven-six badugi, and Aguiar mucked. After the hand, he only had a few hundred chips left, and they were gone quickly.

The final 167 players will return Saturday and attempt to make a run at the gold bracelet. Plenty of big names are still left in the field and the money bubble will burst at some point during the day.

To make sure you don’t miss the bubble burst or any of the other action from Saturday, check out the live reporting blog.

To make sure you don’t miss a single exciting hand from any of Saturday’s tournaments, check out the live reporting blog.