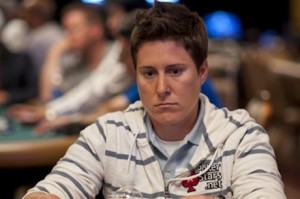 Jack Effel, the World Series of Poker Tournament Director, had a chance to chat with our South Florida ambassador, Big Dave Lemmon, about how the WSOP is going and what he is looking forward to the most this series.

Everything seems to be running without a hitch. Everything is running very smooth. … We had a nice opening day with the employees’ event; we had 2,100 for the first $1,500 event on Memorial Day. … so everything is running good. The players are keeping a good temperament and pacing themselves so far. It will be an interesting summer to say the least, but the spirit of everyone is good right now and everyone is playing hard. They’re all focused at this point.

People are saying the fields might be down somewhat so far but there are a lot more tables this year and things are all spread out so it will tend to look that way. What are your early thoughts? I think that given we had the holiday weekend to start with the hotels in town full and a lot of people not traveling during the holidays, I think that all indications say it will be a great WSOP with a lot of great turnouts. … The hotel is reaching full occupancy with mostly WSOP players, so I forecast that we will continue to get busier and busier.

We’ve seen the deepstacks grow from a couple hundred to almost 600 players, so that tells me players are starting to arrive. Once they get here they never leave and are playing everything they possibly can, but to get here it may take them a while.

Eventually, every serious poker player that has any money at all will make their way to Las Vegas.

I know you bend over backward to accommodate the wishes of players within reason, and there were things that occurred last year on the televised tables (I’m speaking about Daniel Negreanu and others) where people were complaining they weren’t allowed to say some of the things they wanted to at the tables. I think you’ve relaxed some of those rules a little bit. Yeah, that’s true and really the only thing that we’ve done is brought what you see in a poker game every single day back into tournament play; we probably never should have gotten rid of it in the first place, but, of course, you want to uphold the highest level of integrity, and we tightened the rules down so far as to leave no room for collusion or soft play. In the process, we forgot to make the tournament fun and we took away an important part of the game, which is verbal strategy.

But you still have to follow the rules: You can’t expose your hand; you can’t collude with another player; if we catch you cheating you will get penalized or ejected.

These are the things that are there to protect the game. We’re pretty good at our jobs now; I’d say we were great but there’s always room for improvement, but we need a lot of this to play out. Poker is a very emotional game first of all, a very strategic, verbal game as well, so players should be able to banter back and forth and we’ve also relaxed some of the rules against celebrations. We’re trying to create, yes, a poker environment, but keep that level of competition very high and always protect the integrity of the tournament.

Finally, the Big One for One Drop is obviously a huge topic of conversation among the media, the fans and players. But what is the one tournament you’re really looking forward to seeing how it turns out? One of my favorite tournaments is one that is playing right now: the mixed-max, which is nine-handed, six-handed and then heads-up to finish it off. It’s exciting because it’s no-limit hold’em, which is an art form in itself, and to be able to add those three different variations, I really think it’s a cool event.

I’m looking forward to the ante-only event as well, and I’m definitely looking forward to the million-dollar buy-in event. It’s going to be crazy to see how these players react when they pony up a million bucks and have to sit down and play; they may get a little tight and wait for pocket aces then, right? That ace-seven hand on the button and trying to steal the big and small blinds may not be so appetizing anymore. It will be an interesting one and, of course, everyone loves the main event. It’s so intense and everyone is playing their game and it’s just fantastic.

I love the weekends when you get the droves of people in here, the “weekend warriors,” and the one thing that continues to drive me and continue to motivate me to make this event better is the person that comes out here and plays one event and win or lose, just has a great time. “You know, I played at Barry Greenstein’s table, or Phil Ivey may have busted me, but man, I had a great time. I can’t wait to go back next year.”

Or, “I made it to Day 2,” or “I made it to a final table and won a bracelet,” and it’s changed his life forever. You know, those are the types of stories you just don’t see every day and this is the only time of the year that things like that happen. So, the chance to be a part of someone else’s experience that they’re going to remember forever, I think is very meaningful for me and goes beyond all of us.

The WSOP is a gift to us; it’s a privilege to work it and to be here; it is history and a part of this game for a long time and will be as long as we have it. And I think it’s going to be here well after we’re gone.