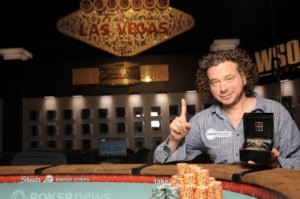 Wow, what a busy time for the online poker scene. The activity is almost bursting at the seams with new developments from coast to coast. Let’s focus on states making progress and putting plans in place to get online poker running as fast as possible (or as fast as government can go).

Nevada: In early June, Nevada’s Gaming Control Board issued its first online poker license to Bally Technologies. After paying the licensing fee of $125K, the only remaining hurdle is getting the stamp of approval from the Nevada Gaming Commission, which should happen by the time you’re reading this.

Other companies, such as International Game Technology and Bwin.party, have also applied for licenses, which will be reviewed and decided soon. Nevada’s Gaming Control Board chairman Mark Lipparelli said the first online poker game by any licensed provider would probably be in six to eight months. This means by the end of the year the virtual cards could be flying for residents and visitors of Nevada.

Illinois: In May, Senate president John Cullerton introduced legislation in the form of a bill that would create a new Division of Internet Gaming inside the Illinois Lottery. With a population nearing 13 million, the estimated revenues, should this bill get passed, are in the hundreds of millions of dollars for the state. Cullerton was hoping to get the bill brought up for a vote in the current session of the General Assembly, but it died. It wasn’t able to meet the procedural deadline of May 31, so it will have to wait until the next session to be addressed again. I will keep you updated on all developments when the next session convenes.

California: While there has been some questioning of whether California and Nevada would partner to for an interstate online poker arrangement, California lawmakers have put that to bed, saying their state isn’t planning on it. The bill on the state’s legislative floor was pulled from the docket in mid June due to continued opposition from several tribal organizations. Even after altering the bill to address the concerns of the tribal groups, there were still not enough votes to pass it. State Sen. Roderick Wright said there was less than a 50-50 chance at getting it passed this session (by Aug. 31), but they would keep trying. I also mentioned last month that Bwin.party Digital Entertainment group had partnered with the United Auburn Indian Community. Well, Bwin.party is hedging its online bets by also filing for a license to operate in Nevada.

Delaware: As reported last month, the Delaware Gaming Competitiveness Act of 2012 was introduced to lawmakers in May. A new twist has come up with this bill. Delaware is supposedly trying to align with West Virginia and Rhode Island to create a three-way interstate partnership. It’s unknown whether the DOJ would approve such a deal. The bill has passed the House and has the governor’s support.

New Jersey: It seems as though the good folks from Jersey are back on their roller-coaster ride waiting for Gov. Chris Christie to endorse the New Jersey Internet Gaming Bill. Sen. Raymond Lesniak tried to get enough members of the Senate to pass the bill by May 31, but failed to because Christie is saying he doesn’t want this issue addressed before the fall, likely because he is a potential running mate of Republican presidential candidate Mitt Romney. Also, Sheldon Adelson, CEO of Las Vegas Sands, is a potential large contributor for the Romney campaign and has made it known he’s against any online poker legislation. So, Christie is playing it politically safe and putting off signing this bill until all of the campaigning and politicking is done.

Colorado: The state’s gaming association has put together a bill that would legalize online gaming. Though the executive director, Lois Rice, has said there are no scheduled plans for introducing anything into the state Senate, it appears there has been some serious thought put to the matter. The bill is supposedly modeled after the New Jersey bill.

PokerStars-Full Tilt on the skids? With the Spanish government seeking back taxes from all online gaming companies doing business within its borders, PokerStars could owe more than $250 million if it wants to continue to have access to that country’s lucrative online population. This could prove to be a large and unforeseen financial expense and could affect PokerStars’ decision to pay $750 million to acquire Full Tilt’s assets and pay back U.S. players. More to come on this as it develops.