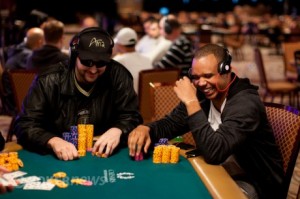 Most poker players, after losing their last chance for a World Series of Poker gold bracelet, immediately start the countdown to the next year’s WSOP. Arizona players, however, are the exception as the Arena Poker Room at Talking Stick Resort and Casino will have a WSOP atmosphere for its eighth annual Arizona State Poker Championship from Aug. 10-14.

With back-to-back years of 1,000-plus entries (it’s a re-entry event), the prize pool again this year is projected to exceed a million dollars. The past two years the event has attracted players from all over Arizona as well as some big-name pros, including Tom Schneider, Allen Kessler, Ryan Hughes, Dwyte Pilgrim, Kristy Gazes, Scott Clements, Sean Getzwiller and Eric Baldwin.

The Jack It Up Bad Beat Jackpot has been creating buzz in the poker room with $20,000 added to the progressive bad-beat jackpot at 2 a.m. on Tuesdays and Wednesdays.

The Arizona State Championship, Talking Stick’s signature event, is plenty to attract players from all over the region, but poker room manager Kent Odekirk has added four warm-up tournaments on top of the daily single-table shootouts to give players an opportunity to win a seat into the championship for as little as $120.

The $1,070 championship is a five-day event with a structure similar to most events at the WSOP, providing players with 25K chips (with optional $30 add-on). Last year’s winner, Steve “Pack” Paulson, took home more than $200K.