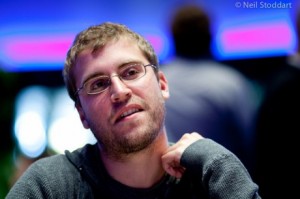 Four tournaments played out at the World Series of Poker on Friday. Only three players remain in Event #27: $1,500 H.O.R.S.E, with the winner to be determined Saturday. In Event #28: $2,500 No-Limit Hold’em Four Handed, players burst the money bubble and are down to just two tables. Event #29: $1,000 Seniors No-Limit Hold’em Championship started off with a bang and created the biggest field of the World Series of Poker so far. Finally, Event #30: $1,500 2-7 Draw Lowball started Friday with 285 players, and Michael Mizrachi will return Saturday leading the final 66.

Eighteen players returned on Day 3 of Event #27. The plan was to play down to a winner, but with action going late into the night, the final three decided to bag it up and come back on Ssaturday. Ylon Schwartz returned Friday with the chip lead and was able to carry it down to the final three players. He will be retuning with David Chiu and Stephen Chidwick to play down to a champion.

Several big names returned Friday still in contention. Hitting the rail short of the final table were Cliff Josephy, Bryce Yockey and Allen Cunningham. Cunningham came into the day in the middle of the pack with an above average stack, but he was done in late in the day by Elior Sion during the razz round. He was eliminated just two spots short of the final table in 10th place for $17,150.

The final table bubble boy was Sanjay Pandya. He was eliminated during the stud hi-low round by Schwartz. Pandya completed with the

. Schwartz raised with the

and Pandya moved it all-in. Pandya’s board ran out

for a pair of eights. Ylon Schwartz didn’t even have to squeeze his last card as his board rolled out

Robby Rasmussen looked like he would steamroll the field as he was the near the top of the chip counts for most of the day, but with just four players left, he started bleeding chips. He was eventually eliminated in fourth placed during the razz round. Rasmussen completed with the

showing and Chiu called with a

showing, as well. Fourth street was a

for both players, and Rasmussen bet, and Chiu called. Fifth street was a

for Rasmussen, and a

for Chiu and Rasmussen bet again only to have Chiu call. Chiu took the lead on sixth street with a

/(x) for an eight low, and Rasmussen was already drawing dead with

Action will resume at 1300 PDT (2100 BST) Saturday and won’t stop until a champion is crowned. Play will start in the hold’em round for one hand and then move to Omaha.

To see action from the rest of the final table, or to make sure you don’t miss any of Saturday’s action, make sure you check out the live reporting blog.

Day 2 started with 86 players in Event #28 with players just six spots away from the money bubble. At the end of the day, only eight players remained standing, and Brendon Rubie was leading the pack with 1,682,000.

needed help, but the board ran dry and he was eliminated in 81st place.

Sam Stein was another player who didn’t make it through the day. Stein was riding a healthy stack for most of play but was eventually crippled by Eric Froehlich late in the day on a critical hand. Tony Dunst opened to 5,000 and Stein three-bet to 12,500. Froehlich then looked at his cards and four-bet to 27,000. Dunst folded and Stein five-bet, and Froehlich six-bet all in. Stein snap called with

and Froehlich turned over

. The flop was good to Stein as it fell

. The turn was the

leaving Froehlich one card from hitting the rail, but the river was the

The final eight players will return Saturday and play down to a winner. Action will resume at 1300 PDT (2100 BST) in the Amazon Room.

Make sure you don’t miss any of the four handed action packed final table. Keep the PokerNews live reporting blog open all day!

Records were broken at the World Series of Poker Friday thanks to Event #29. Over 4,000 players showed up to play in the Seniors No-Limit Hold’em Championship, making it the single largest Day 1 start ever. The field was limited to players over the age of 50, proving that at its core, poker is still an old man’s game. It took six hours to condense the field into one room, but by the end of the night, only 462 players remained.

Several notables in Friday’s field included Sam Grizzle, Eli Elezra, Chad Brown, and James Woods, all of whom hit the rail. Also in the field was James Hess, last year’s champion, who didn’t make it through the day. Hess was eliminated on a

board when his opponent made a pair of queens against his ace high.

Leading the way Saturday will be Radwan Khuri with 112,600, but also still alive in the field are Dennis Phillips, Marcel Luske, Humberto Brenes and Hal Lubarsky. Players ended the day just 39 spots away from the money and should make it down to the pay quickly Saturday morning. Action will begin at 1100 PDT (1900 BST).

To see who walks away with cash, and who doesn’t, make sure you check out the live reporting blog.

The second event that began Friday was Event #30. A small field of 285 players gathered to create a $384,750 prize pool. Leading the way at the end of Day 1 was Michael Mizrachi, who bagged up 86,025 chips when play concluded. Following close behind was Andrew Lichtenberger with 61,150 chips. Among the casualties were Vincent van der Fluit, Leo Margets, Dan Smith, Phil Hellmuth, Daniel Negreanu, Andy Frankenberger, and Phil Ivey.

Also in the field today was PokerNews‘ Live Reporting Global Manager Donnie Peters. Peters almost made it through day one, but was eliminated in the last level of the night by Andrew Lichtenberger. One player opened to 800, Peters shoved all-in for 4,650, and Lichtenberger rejammed all-in only to have the original raiser call. Each player took one card. The original raiser made a king low, Peters made a queen low, but Lichtenberger made an eight-six low and eliminated both players.

Mizrachi, seemingly on fire, was able to amass a monster stack. In one hand, Matt Woodward shoved all-in, and Mizrachi called. Mizrachi held

but Mizrachi drew a

and his nine-six low was enough to take Woodward out.

The final 66 players will return Saturday with money in mind as they play down past the money bubble. Just about half of the remaining field will walk away empty-handed, though, and those who make it through will attempt to play down to the final table of seven. Action will resume at 1400 PDT (2200 BST) in the Amazon Room.

To make sure you don’t miss a single draw, keep your eyes on our live reporting blog.

For all the action from every tournament, make sure you keep refreshing the live reporting blog.

In the video of the day, Kristy Arnett talks with Lex Veldhuis about Event #28: $2,500 No-Limit Hold’em Four Handed, getting some sun and tennis.