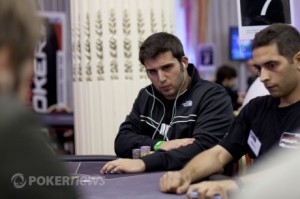 On Sunday, the World Series of Poker Circuit Harrah’s New Orleans $1,600 Main Event continued as the final 72 of a 694-player field returned to battle down to a final table. Day 3 proved to be a fairly expedient affair as the field was whittled down to the final nine in less than 12 hours. Among those returning to battle for the $204,748 first-place prize are Andrew Nguyen, Daniel Lowery, Justin Truesdell, Michael Hallen and Shane Smith; however, no one has a better shot at the money, and a seat into this year’s National Championship, than Anthony Vidmer, who emerged as the chip leader with 2,523,000.

Speaking of chip leaders, Justin Wainscott began the day with the biggest stack by quite a margin; however, that doesn’t always translate to success as he found out. Wainscott lost a good portion of his stack after his

failed to overcome the

Losing that hand knocked his stack down quite a bit, which is when Danny Alvarez swooped in and finished Wainscott off. It happened when four players took a

from the small blind. He ultimately ended up check-raising all-in for around 170,000 and was called by the

of Alvarez. He got it in good, but a

However, no one went further and came up shorter than Jacob Naquin, who finished as the final table bubble boy. In that hand, Vidmer was under the gun and opened for 85,000. Naquin was next to act and wasted little time in moving all-in for approximately 400,000. Action folded back around to Vidmer and he snap-called.

Naquin had been on an up-and-down ride in the latter stages of Day 3, capturing the chip lead and then dropping back down. Suddenly his tournament life was on the line and he needed some big time help. Unfortunately for him, he received none as the board ran out

. With his elimination in tenth place, Vidmer became the chip leader and the WSOP Circuit Harrah’s New Orleans final table was set.

Final table action is set to begin at 1400 CDT (1800 BST) on Monday and one player will walk away not only with the $204,748 first-place prize, but also with seats into this year’s National Championship and WSOP Main Event. The PokerNews Live Reporting Team will be on hand to capture all the action, so be sure to check back then.