White House Responds to “We The People” Petition on Online Poker 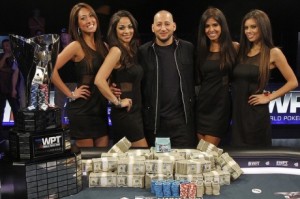 Brian Deese, deputy director of the National Economic Council and a special assistant to the president on economic policy, issued a four-paragraph response on the issue. The first paragraph was introductory and the final paragraph a short conclusion, leaving two paragraphs with any meat to them.

The second paragraph acknowledged that many Americans play online poker and that there is no federal law preventing them from doing so. It goes on to say that it’s up to each state to determine whether it wishes to authorize online poker. That’s a confirmation of the green light given by the Justice Department in December for states to move ahead on the issue.

The third paragraph lists the typical areas of concern for online gambling, such as preventing minors from playing, fraud and money laundering. To that end, the response states:"The Administration will continue to examine this issue and is open to solutions that would help guard against the use of online gambling sites as tools for conducting illegal activities or preying on unsuspecting individuals to the extent that online gambling is permitted."

To the petition’s actual message that regulation of online poker would allow the U.S. to safeguard against such issues while offering consumer protection, creating jobs and raising billions of dollars in revenue, the response said nothing.

Optimists had hoped that the long wait — nearly all other early petitions had received a response — was due to the administration crafting a thoughtful reply. After most of the initial set of responses to various petitions failed to address their content, a petition was created with the title "Actually take these petitions seriously instead of just using them as an excuse to pretend you are listening."

The original poker petition was created by the Poker Players Alliance on Sept. 22 for the "We the People" promotion by the official White House website. Three days later, it crossed the threshold of 5,000 signatures needed for a response. It finished with nearly 10,000 signatures.

"Today’s petition response is promising in the respect that each of the issues raised by the White House can be and will be addressed by U.S. regulation of the industry," said John Pappas, executive director of the PPA. "The best response is for Congress to put a bill on the president’s desk that protects consumers, restores personal freedom and raises much needed revenue."

There is a web form where people can give feedback on if they found the response helpful, if they felt it adequately addressed the concerns raised in the petition and provide additional comments.

Below is the statement in full:

Thank you for taking the time to participate in the "We the People" petition process. We launched this online tool as a way of hearing directly from you, and are pleased to see that it has been effective in soliciting your feedback. We understand your interest in the petition to support the legalization of online poker, and appreciate the opportunity to share President Obama’s concerns about this issue.

The Administration understands that many Americans engage in paid online poker games for entertainment purposes. Online gambling on sporting events or contests violates federal law. The legality of other forms of online gambling is dependent upon the law of the states where the bettor or gambling business is located. It is left to each state to determine whether it wishes to permit such activity between its residents and an online poker business authorized by that state to accept such wagers, but online gambling that is not authorized by state law may also violate federal statutes.

The rapid and anonymous nature of the internet distinguishes online games from onsite games, such as those in casinos, and creates distinct challenges. For example, there are many means of technologically circumventing restrictions on online gambling that can allow individuals from countries where gambling is illegal — or even minors — to play using real currency. Online games also have greater potential for fraud because gambling websites are much cheaper and easier to establish than on-site locations, and like telemarketing scams, can appear and disappear overnight. Finally, online gambling can be used in money laundering schemes because of the volume, speed, anonymity, and international reach made possible by internet transactions. The Administration will continue to examine this issue and is open to solutions that would help guard against the use of online gambling sites as tools for conducting illegal activities or preying on unsuspecting individuals to the extent that online gambling is permitted.

Thank you once again for signing the online petition. We appreciate hearing your opinions and look forward to hearing from you again soon.