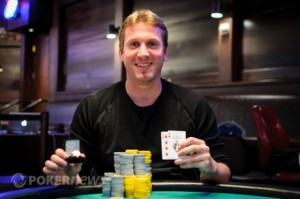 Incomprehensible. It’s the only word to describe Chris Moneymaker’s life over the past decade. We all know the story of the Tennessee accountant who turned $40 into $2.5 million by winning the 2003 World Series of Poker, but the immense pressure that has resided on his shoulders would be enough to break Samson’s back.

It’s not just the duties he must perform as a world champion; he’s Chris “bleeping” Moneymaker! There are but a few people in sports history tied to a moment so remarkable they’re forever remembered as the person who changed everything: Jackie Robinson, Bob Beamon, Lance Armstrong, Pele. You get the point.

At the time, Moneymaker had no idea what was about to happen, so his biggest post-victory worry was … public speaking?

“The day after I won it they told me I was going on David Letterman and I told them, ‘No way! It’s not going to happen.’” Moneymaker said. But he did go on The Late Show with David Letterman, sweating bullets the whole time, and the rest is history. So how do you deal with being the face that launched a billion check-raises?

“Considering where I was in 2003 and how I felt about public speaking and being in the limelight, I think I’ve done a really good job as far as that goes. … That was my biggest fear; that was my biggest problem with winning the main event. Once I got over that, as far as everything else goes, I just try to be nice to people, try to be honest. That’s about all you can do. I think I’ve done all right; I don’t know.”

This summer marks the 10th WSOP for Moneymaker, and quite a few things (good and bad) have changed in Vegas, to say the least.

“The best change is, when I won the World Series in ’03 I got a check and they said, ‘You better get that to the bank because it might not clear.’ So that was definitely a tough thing,” he said with a laugh. “Harrah’s has taken it over and they’ve done a real good job as far as helping out the players and sort of bringing it into the current day. … Back then it wasn’t as commercialized. Now, you go in and it’s all cameras and fanfare, people dressing up in stupid outfits. Back then it was poker. … Having the tournament at Binion’s, there’s nothing like it; there’s just something about that place; it’s really unique. It’ll never be back to those days obviously, but it was a special time and I’m glad I was a part of it, even if it was at the very end. I don’t like how commercialized it’s got, but it had to happen that way.”

In 2003, there were 36 events in the WSOP and 839 entered the main event. This year we have a calendar full of WSOP Circuit stops, followed by 61 bracelet events in Vegas and the number of main event entrants is anyone’s guess.

Before he makes his way to Las Vegas, however, Moneymaker will stop at the Daytona Beach Kennel Club to play in the Deep Stack Charity Classic on May 20.

“I think it’s important to give back,” he said. “I always try to help charities whenever I can. I’m honestly very blessed with my life and I’ve had very good success, so it’s always nice to give back. Whenever a charity calls, I always try to say yes. Even if it’s just signing a few autographs I always try to get done for them.”

And that dovetails nicely with his appearances (he’s an ambassador for the poker room at Presque Isle Downs in Erie, Pa.) and endorsements (he’s a member of Team Blue Shark Optics and a Team Pro for PokerStars), something he embraced immediately after his 2003 victory.

“I probably spend more time doing endorsements and charity events than I do actually playing poker nowadays. … I didn’t want to be a professional poker player; that’s why I stayed at my job for eight months (after winning in 2003). I always liked the steady income, the guaranteed income. Being a professional poker player is a great thing, but the stress of having to go out and kill what you eat just doesn’t appeal to me (when) I can make money endorsing things.”

Christine Stacy, poker room manager at Presque Isle, said Moneymaker is the real deal when it comes to interacting with fans.

“Our players love Chris due to his notoriety; however they have grown to love him even more once they’ve had the chance to get to know him on a personal level,” she said. “People are constantly asking him for pictures, autographs, telling him their ‘bad-beat stories,’ and Chris welcomes his fans with open arms. Even when he’s playing in our room he makes himself available to the public. He is a true gentleman, a pleasure to work with, and I am proud to call him a friend.”

So what’s the best part of being a world poker champion?

“The experiences I get to have, meeting the celebrities I get to meet, playing in some of the games I get to play in, going to the places in the world I get to go,” he said. “Not many people get to go to Monte Carlo and see all these unique places and I get to do it playing the game I love.”

But isn’t there just a little part of him that wishes Sammy Farha had called his “Bluff of the Century” so he could’ve faded back into obscurity as the guy who almost won?

“Why would I ever wish that?” he said with a laugh. “No, I definitely enjoy the life and can’t wait to win the damn thing again.”

Moneymaker main focus of ‘All In’

Ante Up recently got a sneak peak at All In, the Poker Movie, a documentary that uses Chris Moneymaker’s story (and interviews) as its guide and foundation.
For most of his spots in the movie, especially early on, Moneymaker talks about how much of a degenerate gambler he was before his 2003 run. Ante Up wondered if he ever tired of telling that story and if it was too depressing to live over and over again.
“I really don’t think it’s a depressing story; it made me who I was. To be perfectly honest, I’m glad I went through that stuff, just for the fact that I know what it’s like to be broke; I know what it’s like to eat Ramen noodles. After I won the main event I knew I never wanted to go back to that. I knew both sides of the tracks. …”
“After what I had been through with my sports gambling, I knew I wasn’t going down that road again. … The reason I bet was to get money, and I already had the money so there was no reason to bet anymore.”