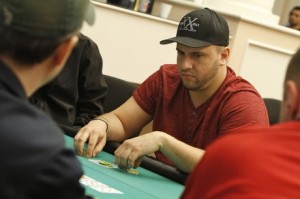 “I didn’t come here for sixth-place money,” Presley said during the final table to HPT’s Jen Mastrud. “If I catch any cards today, these guys are in trouble.” The final hand came down between Presley and Robert Bratton of Rogers, Ark. Bratton’s chips were all-in preflop with J-2, which was no match to Presley’s A-Q.

Bratton, who barely made it to the event after his car died on the way to the event, was chipleader when he reached the final table. Bratton thanked “the best girlfriend ever” for encouraging him to play and his second-place winnings of $44,670 can afford him a more reliable vehicle.

But the action wasn’t all on the tournament felt. Cash games thrived, especially in the first several days of the event. Waiting lists were long and some cash players offered $100 to players in exchange for their seat at the table. The most popular game was $1-$2 no-limit accompanied by $2-$5 no-limit and $5-$10 Omaha.

Smith played in the $1-$2 NLHE and he kept moving all-in with his $200 max buy-in. Though it frustrated some players at his table, the rest were thrilled to have his chips there. It made for juicy cash games later in the night as stack sizes increased.

Downstream’s next event is the Four-States Poker Championship, which will run May 24- June 3.

CHAD BROWN CHALLENGE: Choctaw Casino in Durant, Okla., will host the Chad Brown Poker Challenge on April 19-29 (See ad next page). Brown will be on hand, along with a special guest appearance from Men “Master” Nguyen, as this series features buy-ins starting at $200 and a $2,000 main event.
There will be a live broadcast and nightly tournaments as cheap as $125. Book your room by calling 580-931-8340. Use offer code 12122 and receive room rates in the Grand Tower from $79-$99 or visit choctawcasinos.com/durant. Visit us next issue for a look at the winner of Choctaw’s Spring Break Poker Challenge, which ran March 15-18.

• Also in our May issue will be a recap of Cherokee Casino’s Ozark Poker Championship (March 13-18) in West Siloam Springs, Okla., and more about how Kansas poker action has been heating up this year with the opening of two cardrooms. Hollywood Casino at Kansas Speedway has hit the scene with a bang and a popular $1-$3 NLHE game and Kansas Star Casino just outside of Wichita in Mulvane has opened a temporary room with five tables.

— Crystalynn Harris is the Ante Up Ambassador for the Oklahoma-Kansas area. You can email her at crystalynn@anteupmagazine.com.