Poker pro Jason Senti making the most of situation 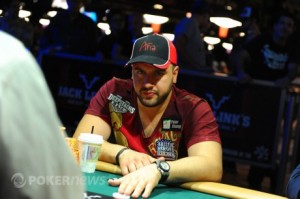 When the Department of Justice seized the domains of major poker sites last year, it dramatically changed the poker landscape. Minnesota poker professional Jason Senti, best known for his seventh-place finish in the 2010 World Series of Poker Main Event, was affected by Black Friday for sure.

Senti didn’t play much online between the time he made the main-event final table and March 2011. He planned to get back to grinding lots of online poker from March until the beginning of the 2011 WSOP, where he planned to play about 30 tournaments. In fact, he did play 5-10 hours a day five days a week for the month leading up to April 15.

“Then (Black Friday) hit and I didn’t know what to do,” he said. With so much uncertainty in the future of a reliable poker income he decided to change his plans. He played only a handful of WSOP tournaments and instead concentrated on playing the lucrative cash games. Senti has maintained his position as a pro for the online training site Blue Fire Poker, as well as taking on the role of being a poker ambassador for the Canterbury Park cardroom, which hosts an HPT event this month (April 19-29).

However the desire to play online poker has prompted Senti to set up a second residence in Vancouver, where he can play online poker on the largest sites available. He’s optimistic poker will be regulated in the United States soon.

“If poker was reasonably regulated within the U.S., I would probably have to plan on playing far more poker than I (ever have) in the first couple of years following (regulation),” Senti said.

For now, he’ll continue to commute to Canada to play poker and hope for U.S. regulation. If regulation doesn’t come, he’ll eventually need to decide to move somewhere else to play professionally or perhaps make a career change. But for now, he’s hopeful online poker regulation is on the horizon.

MSPT: Rodger Johnson of Grand Forks, N.D., won the record-setting Mid-States Poker Tour at Running Aces Harness Park in Columbus, Minn., on Feb 4-19.
Johnson took home $79,185 after beating a field of 311 in the second MSPT event he has played. MSPT events this season have a Day 1A and 1B. This helped this event have more entrants than any tournament with a similar buy-in held by the MSPT or Running Aces.