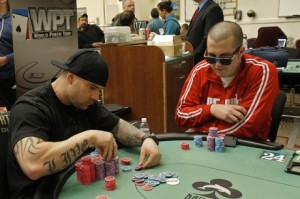 More than 2,500 players are expected April 5-14 for the Horseshoe Casino in Southern Indiana during the nine scheduled events for the Midwest Regional Championship.

Poker manager Jimmy Allen attributes the increase of attendance to an unprecedented guarantee in prize pools.

“We are guaranteeing prize pools this year as well as adding a seat to the World Series of Poker Main Event,” he said. “Eight of the nine scheduled events are offering guarantees ranging from $5K to $25K.
It’s anticipated the largest fields will be Event 1 (April 5, no-limit hold’em, three days, $230) and Event 3 (April 8, $345 NLHE). These events guarantee $25K and $20K, respectively.

With daily single-table tournaments beginning April 5 and super and mega satellites on April 13, there will be plenty of opportunity to win a seat into the $750 main event on April 14.

POKER FOR SIGHT: About 20 minutes north of downtown Indianapolis, the Westfield Lions Club will host its biannual Poker for Sight charity tournament on April 20-21 in Noblesville.

This $135 charity event is one of the largest in Indiana, with nearly 300 players expected to play. The top 15 percent of each of the three qualifying sessions will move on to the championship round April 21 at 5:30 p.m. There will be one rebuy and one add-on, and $10K goes to first place. For more details, go to lionspoker.org 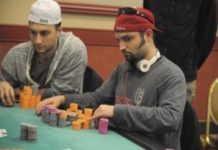