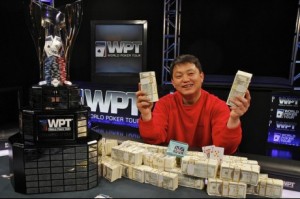 For the Horseshoe’s Chicago Poker Classic, it’s enjoyed incredible growth since its inaugural event in 2009. Back then, five tournaments combined had 474 entries with a prize pool of $672K. This year’s $240 buy-in opener saw an amazing 2,621 entrants creating a prize pool of $545K. Winner Paul Gibbons took home $97,192.

“This feels good, I’m a little bit tired, but it feels good,” Marsico said after a four-day tournament in which he had the chip lead for Days 2 and 3 as well.

WCPC: The December 2011 Windy City Poker Championship events begin broadcasting on Comcast SportsNet Chicago every Sunday (for four weeks) at 7 p.m. (CT) starting April 8. Check local listings for additional dates and times. Other networks include Bright House Sports Network, Cox-CST Cable and Comcast SportsNet Mid-Atlantic. The WCPC has its next event in the works, a four-day televised charity event at the American Legion in Tinley Park on June 21-24.

HPT: The Heartland Poker Tour will be at Majestic Star from May 11-20.

STATE NEWS: State Rep. Lou Lang, D-Skokie, has introduced some changes with the Illinois Charitable Games Act that passed the House. ICGA regulations were created in 1984, the same year the WSOP main event had 132 entries. With the state capital having little understanding of the poker industry, regulations were created making it difficult for charities to operate. Some of the new regulations that will go to the Senate include having Illinois Gaming Board take control over previous held Illinois Department of Revenue. Other changes include increasing the maximum cash winnings to $500 (increase from $250), charities will be allowed to operate 12 charitable games events yearly (vs. only four per year now).