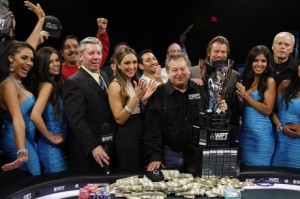 It’s fair to say Heartland Poker Tour loves coming to Black Hawk, and the affection is mutual. Last fall’s event, the 10th at the Golden Gates, set a Heartland record with a prize pool that topped $1 million. Jen Mastrud, general manager and public-relations director for the HPT, said she expects this month’s event, running April 9-22, to do even better.

“That tournament kind of became legendary for us, that’s the one that everyone wants to go to,” Mastrud said. “We expect to meet (the $1 million pool) or exceed it this time around. We’ve been there so many times; they really have it down. And who doesn’t love Black Hawk? It’s scenic; it’s fun; it’s a great vibe there.”

Last fall’s event was influential in several ways. It attracted 668 players and its payout saw a 35 percent increase over the previous Golden Gates HPT. It was won by the appropriately named Craig Casino (his real name), who cashed $293,270.

That was the first time in the tournament’s history where players were allowed to re-enter the main event if they’d been knocked out in any of the first few levels, an adjustment that helped build the seven-figure prize pool and prompted HPT to retain that structure change (with a few adjustments) in its 2012 events. Casino busted out twice before coming back to win the 2011 event.

Mastrud is careful to be clear there’s a big difference between re-entry and rebuy, as the latter can prompt concerns about overly loose and unpredictable play: “It’s not a rebuy. (Players) are not buying more chips; they’re buying into a completely new flight if they’re knocked out. They back come in as if they’re a new player, just one more body in the field. (You’ll hear) a player say, ‘I just knocked this guy out, now he’s sitting across the room,’ but he’s just like a fresh player investing into the pool.”

She estimated that feedback on the change has been “conservatively, 90 percent positive. It’s been hugely successful… For players to commit the time and the travel to come from out of market, they want to know that they have a couple of bullets; if they take a bad beat on the first hand, their (tournament) isn’t over.”

That’s a fair concern, given that Black Hawk is somewhat remote, even for Denver players; you don’t want to make that steep drive up the mountain and turn right back around. Skip Levin, who lives a few hours away in the Ft. Collins area and plans to play the Golden Gates HPT main event, considers it an ultimately necessary tweak.

“It probably does more good than harm, and it’s putting more money in, so you know that’s the way things are going to go,” Levin said. “You just have to adjust your play up front and know what you’re getting into. … The villain might not be playing for his life, or he might, so you’re in the driver’s seat if you can read that.”

Mastrud also said HPT is popular in the Centennial state because its national TV show runs “almost around the clock” in the Colorado markets. The episodes featuring the April event’s TV table will run the weeks of June 26-July 4 and July 5-11.