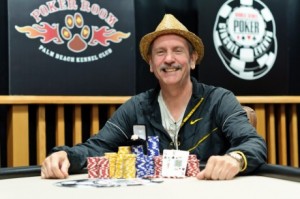 The return of the World Series of Poker Circuit to South Florida in February was an overwhelming success in the eyes of most of Palm Beach Kennel Club staff, players and onlookers throughout the poker world. I say “most” because there were no truer words than the famous adage, “You can’t please all of the people all of the time.”

The opening event, with its million-dollar guaranteed prize pool, was expected to be a monster and it was.
It exceeded expectations and as a result, drew most of the complaints, which came mainly from procrastinating players who ended up getting shut out of the event. Poker players are famous for showing up late, that’s not the surprise. Despite announced starting dates and times, they often come sauntering in just about any time they feel like it.

What’s surprising is in spite of numerous warnings to enter early this time or face a spot on the rail, hundreds waited until late Saturday morning (Day 1C) to show up to play. With people lining up for those last spots as early as 4 a.m., the morning outside the kennel club took on the feel of a game-day sporting event.
However, as start time drew nigh and the last-minute arrivals found themselves at the back of a long line, civil behavior quickly evaporated. Pushing and shoving, attempts at cutting in line, near-fistfights and the threat of arrests were reported. Eventually, order was restored, but a large portion of the Day 1C field was in a foul mood as action began.

PBKC director of poker Noah Carbone, trumpeter of the cautionary warnings and later the bearer of bad news, was a class act throughout the ordeal. While undoubtedly biting his lip, he issued an apology to the angry complainers on poker forums, vowing to make improvements in the near future while knowing in his heart the blame for the morning’s manic scene could not be entirely placed on his shoulders.

“We heard the criticism loud and clear,” he said. “We are not prideful and we didn’t ignore it, but at some point, players need to take responsibility and listen to our warnings to enter as early as possible.”

With 2,000 players required to reach the $1 million guarantee, Carbone was prepared to comfortably surpass that number, expecting 75 full tables (up from 64 tables in 2011) and about 50 alternates each day to cap the field at around 2,400 players. The final number was 2,607, nearly three times greater than the previous year’s opener, thanks to an added 4 p.m. flight on Day 1A, which fit in 220 early attendees.

“We hoped to add two more flights, but ran into logistical problems with available tables, chips and dealers,” he said.

The final nine days ran smooth as silk, with exciting and competitive play yielding 12 ring winners (five from Florida). Cash games surrounding the ring events were plentiful and on par from the previous year, while tournament numbers were up across the board.

“The biggest improvements from last year were in the nightly and second-chance tourneys, which were way up,” Carbone said. “We saw many more players this year from out of state and we had a big turnout of international players, especially from Germany and Canada. The H.O.R.S.E. event (247 players vs. 178 in 2011) was a record for a WSOP Circuit series, and it shows that interest in mixed games is on the rise, but seems to attract an older player.”

Speaking of older players, major accolades should go to the series’ biggest winners, two 50-somethings who rose above a sea of those younger than 30. Canadian contractor Jim Harnden, 58, captured the main event and more than $226K, while Anh Lu, a 50-year-old nail technician from Bradenton, Fla., took home nearly $183K for his victory in Event 1.

Great stories abounded from the 12 days of play: Joseph Patalano overcame a 16-to-1 chip disadvantage entering heads-up play in the $1,080 NLHE event to battle back for the win.Ladies finished 1-2-3 in the open Event 2 (Loni Harcourt, Anne Amato and Amanda Musameci), while Abbey Daniels nearly followed up last year’s WPT final table at the Hard Rock with her first major title, only to finish second to Jake Schindler in the six-handed event.

As the final events came to a close, Carbone congratulated his staff and looked forward to next year, after welcoming an opportunity to catch his breath.

“After 12 intense days, we all need a little rest and relaxation; it will be nice to settle back into a normal pattern, but I’ll bet that two weeks from now we’ll miss all the players and the excitement they brought to this place. That’s our goal for next year, to allow everyone that wants to play the opportunity to get a spot; we certainly will be able to handle well over 3,000 players, but who knows what the demand will be by then.”