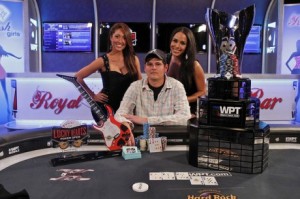 Southern Calfornia has the glitz of Hollywood, but Northern California is rich in history. Featuring some of the oldest cardrooms in the state, thanks to the Gold Rush of the 1850s, the San Francisco Bay area has plenty of places for rounders to match wits in San Francisco, Oakland, San Jose and surrounding cities. A short drive east will get you to a vibrant community of card clubs in the capital city of Sacramento, ringed in all directions by luxurious tribal casinos. And all the way north to the Oregon border you’ll find friendly, neighborhood rooms where you can enjoy your favorite game.

Artichoke Joe’s | 650-589-3145
artichokejoes.com
Founded in 1916 by Joseph Sammut, this San Bruno room near San Francisco International Airport got its name five years later when Sammut, who accepted wagers of any size, quipped he’d pay off any big bet he lost “in artichoke leaves.” The room is still owned by the Sammuts and it shows with an atmosphere only a family can foster. It has a 19th-century look for a historical feel, but with modern touches such as aquariums. Tournaments with buy-ins as little as $20 run most every day, with bad-beat jackpots in hold’em and Omaha.

Livermore Casino | 925-447-1702
livermorecasino.net
Fresh off a remodel, this poker room is stylish. First-time players will have a hard time beating this offer: $20 gets you $50 in chips with a coupon you can download from the website. Experienced players have plenty of reasons to play here, too, from high-hand, royal-flush and bad-beat bonuses. Plus, the first nine players in live games each day get $50 in chips for a $30 buy-in. Hungry? A $2.99 breakfast is offered around the clock.

101 Casino | 707-795-6121
the101casino.com | @the101casino
This Petaluma cardroom, part of the Park West Casino family, offers the obligatory limit and no-limit hold’em games (with the rarer kings and queens cracked to go with aces cracked certain hours) and tournaments (including World Series qualifiers), but twice a week also features Mexican stud at 6 p.m. The game features a high-hand progressive and limits of $4-$50 on Wednesday nights and $5-$500 on Saturday nights, and the first nine players are treated to a taco dinner.

California Grand
925-685-8397 | californiagrandcasino.com
The Pacheco location opened a new facility across the street from its long-time facility in July 2009. The room features 19 tables and chip bonuses for early morning play and several high-hand and bad-beat promotions. A $55 tournament is held Sunday mornings.

Oaks Card Club | 510-653-4456
oakscardclub.com
They’ve been playing cards at the corner of Park and San Pablo in Emeryville since 1895 at what is another of the historical Northern California cardrooms that have been owned by the same family for generations. The club took its name in the mid 1930s in deference to the Oakland Oaks baseball team, and walking inside you instantly soak up the history of gamblers who’ve played at the same tables as you will today. Cash games come in several varieties, including pan, a game of Mexican origin that was a predecessor of rummy. Tournaments are held most days of the week, including World Series of Poker qualifiers.

Bay 101 | 408-451-8888
bay101.com | @bay101live
Fans of televised poker will recognize the dolphin fountain in the front of this San Jose room famous for its annual Shooting Star tournament that puts bounties on an impressive list of professional players. The tournament is the only World Poker Tour event in Northern California, and this year’s event is March 5-9. The room also hosts the Bay 101 Open series in August. Daily tournaments start at $120 with several $540 events each month. A strong variety of cash games can be found, including Omaha/8, and the high-limit area hosts popular nose-bleed stakes games.

Garden City Casino | (408) 244-3333
gardencitycasino.com | @gccasino
If you haven’t been to the mountain-chalet-themed Garden City Casino in San Jose, you had better hurry. This spring, the long-time cardroom will close as its owners christen the posh Casino M8trix (408-645-0083, casinom8trix.com) just across the freeway from Bay 101. M8trix will call a newly constructed eight-floor tower home, with high-end baccarat games on the exclusive top floor and dozens of hold’em games offered in intimate “cocoons” on the first floor. M8trix hired some of the best casino designers in the world to collaborate on bringing the dream to reality, so expect high-end touches.

Casino 580 | 925-455-6144
thecasino580.com | @580casino
The Park West Casino poker room in Livermore features a number of daily promotions, and it pays to get there early. If you help start a cash game before 10 a.m. and play for two hours, you’ll get an extra $20. Raffles are every four hours starting at 11 a.m., and tournaments are every morning. The Saturday and Sunday events are just $25, and you’ll earn points toward the monthly leaderboard in the weekday events.

Lucky Chances | 650-758-2237
luckychances.com | @luckychancesc
They tell us the old saying in Colma is, “It’s great to be alive in Colma!” The city is home to 16 cemeteries and 1.5 million dearly departed folks, including Joe DiMaggio, Wyatt Earp and William Randolph Hearst. The action however, is anything but dead as you pass through the city-mandated stately exterior after enjoying complimentary valet parking. The room, decorated in an Asian theme, runs tournaments Sundays through Thursdays and says it’s the only room in Northern California with guarantees on all of its tournaments. If you’re an Omaha player, you’ll want to come here on Tuesdays when the game’s jackpot is doubled from noon until 6 a.m. on Wednesday.

Napa Valley Casino | 707-644-8851
napavalleycasinoonline.com | @napavcasino
The poker room in American Canyon calls itself the “friendliest casino in America,” and based on the amount of its player promotions, how can we argue? It starts with free donuts in the morning, and soups and sandwiches in the evening. If you’re a night owl, play 30 hours between 2-9 a.m. each month and you’ll compete in a freeroll with a top prize of $1,500 on the first Saturday of the month. Later that day you can play in the $115 monthly deepstack tournament, though other tournaments are every Saturday, Sunday and Monday. Call ahead to reserve your seats in the Saturday night $5-$10 no-limit game or Wednesday’s pot-limit Omaha game.

Cache Creek Casino | 530-796-3118
cachecreek.com | @cachecreekcr
The luxurious tribal casino in Brooks features a well-appointed 14-table poker room with loads of promotions. For 12 hours every weekday, if your aces are cracked you’ll get $50. One pot an hour is splashed during the graveyard shift, and the first Saturday of the month features five cash drawings of $500 each. Rebuy tournaments for $55 are at 6 p.m. Wednesday evenings and at noon on Saturdays and Sundays.

FLB Casino | 916-983-4411
flbsportsbar.com | @FLBSportsBar
They say they have the lowest limit hold’em collection in Sacramento, and they’re also generous with loyal customers. Play at least 10 hours a week and earn cash back; play 40 hours and get $500. There’s also a sports bar and a nearby bowling center so there’s something to do for everybody.

Cordova Casino | 916-293-7470
cordovacasino.com | @cordovacasino
If you like to enjoy a fine beer while playing, this Rancho Cordova room is the place for you. Built around its expansive beer menu, you can take part in its 99 Beers to Glory promotion while matching wits at the table. And if you want something for the beer to wash down, play for two hours and you get a free meal. The Park West Casino room that feels more like a Tahoe lodge than a poker room features plenty of other promotions, from daily raffles and bonus buy-ins to a super bad-beat jackpot, and tournaments three days a week where players earn tournament leaderboard points based on their finish.

Jackson Rancheria | 209-223-8469
jacksoncasino.com | @jacksoncasino
This tribal casino in Jackson has just hired a new manager and at press time was busy putting the final touches on a new 24-hour poker room on the new casino floor. The room should be open by the time you’re reading this magazine, or shortly thereafter, and promises new tournaments, freerolls and aces-cracked promotions.

Red Hawk | 530-677-2580
redhawkcasino.com | @redhawkrewards
The tribal casino in Placerville features a modern poker room that focuses on tournaments and features tableside dining and several flatscreen televisions. Daily tournaments are at 10 a.m. and every Sunday, Monday, Tuesday, Wednesday and Thursday at 6:30 p.m. The Tuesday tournament is a bounty event.

Lotus Casino | 916-399-4929
mylotuscasino.com | @mylotuscasino
Formerly the Silver Fox Casino, this Park West Casino poker room in the Little Saigon area of Sacramento is fresh off a multimillion-dollar renovation to go with its new name. The Rollover Raffle features four $100 drawings per day and if no one claims it within five minutes, it rolls over to the next drawing. It’s just one of a flurry of daily promotions, including splashed pots, high hands and aces cracked. Hungry? Play for two hours and you get a free meal.

Capitol Casino | 916.446.0700
capitol-casino.com | @capitolcasino
The largest cardroom in Sacramento, Capitol features 15 tables in 17,000 square feet of space. Daily tournaments starting at $30 are offered, including a $220 deepstack on the second Saturday of every month as well as occasional larger events. Promotions include bad-beat jackpots and high-hand and royal-flush bonuses, and if your aces are cracked you get to spin the wheel. Don’t miss earning tickets for the April 28 drawing featuring a top prize of a new Ford Ranger truck, as well as 35 other prizes, including cash.

Phoenix Casino | 916-331-2345
playphoenixcasino.com | @phoenixcasinoca
This cardroom is giving away six seats to the World Series of Poker, headlining a strong collection of player promotions. It does three cash drawings a day, gives you $80 for your $40 buy-in at 8 a.m. each morning and provides free sushi on the first Wednesday of every month. Daily tournaments cost $35 or $40, including a PLO tournament on Mondays, and the room adds $500 to the prize pool of Friday and Saturday events.

Thunder Valley | 916-408-7777
thundervalleyresort.com | @thunder_valley
Ben Erwin is the young, energetic and creative leader of this constantly growing poker room at the tribal casino in Lincoln. Recently expanded and still filled with players, the luxurious room combines innovative promotions (it gave away a Corvette last month) with exciting tournaments that regularly attract players from Reno and beyond. The Harvest Hold’em Series in November drew a more-than-capacity crowd, and similar excitement surrounds this month’s Sweet 16 Tournament Series, a 16-event series that ends with a $385 main event. World Series of Poker satellites run through May 4.

Lucky Derby | 916-726-8946
luckyderbycasino.com | @luckyderby
This Citrus Heights cardroom has a Cheers-like feel from the minute you check in with the host. The attached Rounders sports bar helps, too. And here’s something Norm and Cliff would love: a $1 buy-in tournament on the last Saturday of the month with a $1,000 guaranteed prize pool. Yes, that’s right. Just one dollar. Other tournaments for as little as $20 run daily, and on Thursday nights it hosts a poker league with teams of up to four players. The next two-month league begins in April. A pot-limit Omaha/8 tournament on the second Sunday of the month is just of the many other creative tournaments you’ll find in addition to cash games.

Wine Country Casino | 209-365-4150
winecountrycasino.com | @winecountrypkr
For as little as $15, you can win a seat in the WSOP main event at this recently renovated Park West Casino cardroom in Lodi. But perhaps more unique is its Wine Country Poker League. The league started in October and runs through September of this year, but the action is broken into two-month intervals so you join at any time. The top 30 point-earners at each interval get to face off in a $7,500 prize-pool tournament. The top five in each of those events advance to the $50,000 championship Oct. 20. Earn points for the events by playing in cash games or finishing high in daily tournaments.