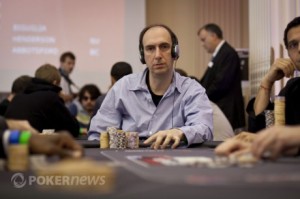 Tuesday marked the fourth and final day of play at the World Poker Tour Lucky Hearts Poker Open at the Seminole Hard Rock Hotel & Casino in Hollywood, Florida. When the final day began, only six players remained to fight for the $268,444 first-place prize. Already guaranteed $42,185 for making the final table, the player who finally walked away with the title was familiar with being in the top spot. After Day 1 and Day 2, Matt Juttelstad held the chip lead. After Day 3, he sat in second place. And after Day 4, Juttelstad was kissing the trophy and holding bricks of cash, following a 303-hand final table.

Keith Ferrera was the first player eliminated. During Level 23, with the blinds at 10,000/20,000/3,000, Ferrera’s final hand came up. It was the 89th hand of the final table, and Juttelstad raised to 45,000 from middle position. Ferrera reraised out of the small blind to make it 120,000. Play folded back to Juttelstad who didn’t back down, four-betting to 305,000. According to the WPT Live Update Team, Ferrera tanked for roughly two minutes and then moved all-in. Juttelstad made the quick call holding

. Ferrera was at risk with

and Ferrera took the lead with a pair of jacks after out-flopping Juttelstad’s nines. The

on the turn didn’t change too much, but Juttelstad did pick up four additional outs to a gut shot straight draw. Still, Ferrera was in front. The river card delivered a dagger to Ferrera with the

and vaulted Juttelstad back to the lead with a set of nines. With no more cards to come and Juttelstad having his opponent covered, Ferrera was sent to the rail in sixth place. His payday was worth $42,185.

From the cutoff position, Sharon Levin raised all-in for about 800,000. Jacobson called all-in from the button for less, holding about 600,000 in chips, and everyone else folded. Levin tabled

for just one overcard to Jacobson’s

Jacobson’s tournament life was still alive after the

on fourth street put Levin in front. Jacobson needed a ten, and only a ten, but the dealer rolled over the

A couple of orbits around the table followed Jacobson’s exit before Levin fell in fourth place. He raised all-in from the button for 810,000 and Gigi Gagne called from the big blind. Levin held

and was at risk. Following an

river completed the board to eliminate Kadosh. He earned $105,463 for his finish.

When heads-up play began, Juttelstad held the lead with 6.82 million in chips to Gagne’s 2.03 million. From there, Gagne couldn’t find any traction and never climbed above 2.3 million in chips as Juttelstad kept knocking her back whenever she tried to get something going. Then, on Hand #303, it all ended with a bang.

landed on the turn and Gagne moved all-in for 1.805 million. Juttelstad snap-called holding the

for the flopped nuts. Gagne had turned a five-high straight with

. Gagne was only able to stay alive with a chop, but the river produced the

— not the six Gagne needed to keep the fight going. She was eliminated in second place, earning the largest score of her career — $158,194.

For his victory, Juttelstad scooped up the $268,444 first-place prize, which includes a $25,500 seat in to the WPT World Championship at the end of the season. Juttelstad also won the beautiful WPT trophy along with a second trophy from the Seminole Hard Rock Hotel & Casino.

The next stop along Season X of the WPT will be the L.A. Poker Classic held at Commerce Casino in Los Angeles, California. The $10,000 Main Event will begin on Feb. 24 at 1200 PST and PokerNews will be providing daily recaps of the event. Last year, Gregory Brooks took the title and the winner’s take of $1,654,120. This event always has the biggest names in the game out for action as well as a massive field, so you won’t want to miss it. There will also be a $25,000 High Roller that kicks off on Feb. 26 at 1900 PST.