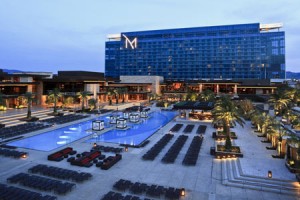 Colorful high-stakes amateur Rick Rahim (made famous from his stint on Fox’s the Big Game) was there along with fellow Big Game Loose Cannon Nadya Magnus. Rahim flew in a soldier from the East Coast who fought in the Iraq war.

“The WCPC tournaments are unique, giving local players a chance to battle it out with the top players in the world,” said Dick Carlson, playing in his third WCPC event.

Amanda Musumeci and Jamie Kerstetter, who both cashed in the 2011 WSOP main event, were on hand as well.

The four-day event kicked off with the Ante Up Magazine-Chicago Poker Championship as Nancy Fallah returned to try to defend her title and 2009 champ Leroy “Talk Show” Carver and 2010 winner Mike Sabbia were there.

For David McDermott, co-creator of the WCPC, this tournament may be his most memorable. The savvy veteran, runner-up at the Chicago Poker Classic six-handed event in 2010, found himself facing his son, David Jr., for the Ante Up Championship. David Jr., an 18-year-old business major at Illinois State, showed he was just as talented as his dad. His aggressive style in his first live tournament proved too much for his father, winning the Ante Up Championship.

“The $1,500 winner-take-all event was a great experience, giving me the chance to play with a caliber of player I usually don’t get to experience,” said Bertini, who won her seat that afternoon in a $75 satellite. For Griffith, who lost her mother to cancer, this was a special experience knowing proceeds from this event went to cancer research.

Sitting a few seats from Griffith was Chad Brown, who has battled cancer. He played theWCPC to supportthe H Foundation, a charity group that donates funds to basic cancer research.
Paul Fisher, the third amateur at the table, faced Jaka for the title, but in the end Jaka showed why he’s one of the world’s best by winning the event.

The McDermotts took center stage again by making the main-event final table. Heads-up winner Jim Casement also made the final table and 2008 HPT Player of the Year Mary Jo Belcore-Zogman was one of the short stacks.

“At the start I didn’t know who they were but quickly realized they were very good players,” Parille said of playing against his final-table opponents earlier in the event. “I studied them closely, then I applied what I learned during the final table.”

— Crystalynn Harris, Kirk Fallah and Jason Finn contributed to this report. More photos can be seen at chicagopokerclub.net. “Chicago” Joe Giertuga is Ante Up’s Chicagoland Ambassador. Email him at chicago.joe@comcast.net.