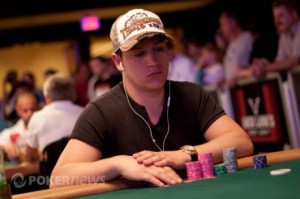 The Autumn Feast tournament at Potawatomi Bingo and Casino on Nov. 13 came down to Brian Andrews and Patrick Mayew. The $500 buy-in attracted 182 players for a $91K prize pool, and in the end Andrews bested Mayew heads-up to capture the $27,527 first-place prize.

The Autumn Feast Tournament, one of only a few events held here each year, came on the heels of Potawatomi’s first $100K event, the Mid-Summer Classic on July 31, which drew 201 players for a top prize of $30,650, which Michael Altman won. That tournament proved so popular it had sold out at 200 players a week in advance. The aforementioned extra player was reserved for the tournament’s special guest, Vince Van Patten.

The commentator for the World Poker Tour was on hand to mingle with players, play in the tournament and fulfill his role as Potawatomi’s spokesperson.

Potawatomi’s poker room, at 1721 West Canal Street near downtown Milwaukee, houses 20 tables and offers a variety of games, including limit and no-limit hold’em, stud and Omaha, all available at multiple stakes, 24 hours a day.

On a final note, Potawatomi has been so enthralled with the success of its events that it has decided to re-establish weekly tournaments. Beginning this month, tournaments will be Sundays, Mondays and Wednesdays. Call 414-847-7605 for more details.

— Chad Holloway is Ante Up’s Wisconsin Ambassador. He’s also a senior writer for PokerNews.com and contributes to Phil Laak’s Unabomber Poker Blog. Email him at anteupchad@yahoo.com or follow him on Twitter @ChadAHolloway.