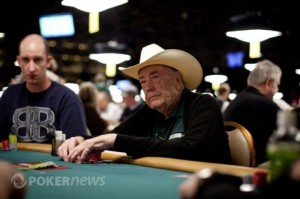 Just when it looked like Harrah’s Joliet was done making changes, poker room manager Doug Walters comes up with the bimonthly Big Game. On Feb. 17 Harrah’s will host a $10-$20 no-limit hold’em game with a $5 ante. Minimum buy-in is $1,000, plus a $5-$10 NLHE feeder will be run. The Big Game, which has no cap, is the third Friday of the month. Another one is scheduled for April 20.

The changes didn’t stop there, however, as the rake has been reduced to $4 max between 9 a.m. and noon daily. Since opening six months ago, players have seen more promotions than all Illinois poker rooms combined.

“We are committed to making our guests’ experience unique here at Harrah’s,” Walters said. “We constantly look for ways to make playing here the place to play in Illinois.”

Said Harrah’s Joliet VP Josh San Salvador: “Though I’ve only been with the Harrah’s Joliet team for a about (a month), it’s clear to see the property is committed to offering an excellent product from the standpoint ofboth tournamentsand promotions, as well as the physical room itself. I am confident as we continue to enhance these things to go along with our unparalleled customer service, the Harrah’s Joliet poker room will continue to grow and thrive in the Chicagoland area.”

• Harrah’s first poker league just wrapped up with Dave Roemer winning his way to the World Series of Poker Main Event. The nine-week league had more than 90 players. Roemer made it into the finals by finishing eighth.

“What I really enjoyed about the league was the sense of camaraderie that builds with some of the other league players that you see week after week,” Roemer said. “It makes the league that much more enjoyable; it’s really a good time.”

• With the Horseshoe Hammond’s Chicago Poker Classic just around the corner (Feb. 23-March 5), the $3,125 main event is the largest buy-in tournament in the Chicago area. Last year’s event had 304 entrees with Skokie native Tom Koral taking top honors. The seven-game mix tournament returns, as will NLHE and PLO.

“I look forward to the challenges that the seven-game mix tournament offers,” last year’s runner-up Angelo Fuscone said. “Unlike other tournaments, players’ skills need to be well-rounded.”
The Horseshoe will be adding more than $350K to its tournaments, including a 2012 Camaro. For the complete list of events, go to horseshoehammond.com.

• Northwest Indiana’s Bar Room Hold’em League begins its second season on Jan. 8. This free league will run at 26 locations with $13,000 in prize money up for grabs. Scott Eriks has been one of the organizers from the start.

“We created a league where a local player can come out to a location, play free poker and meet some great people and have a great time playing poker,” he said. For more information, go to barroomholdemleague.com.

— “Chicago” Joe Gieturga is the Ante Up Ambassador for the Chicagoland area. You can email him at chicago.joe@comcast.net.