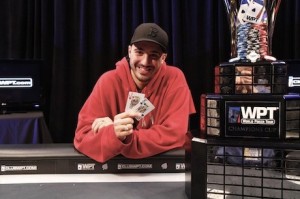 After three long days on the felt, Tuan Phan won the World Series of Poker Circuit Harrah’s Atlantic City Main Event and pocketed a cool $188,830, a WSOPC championship ring, and seat to the WSOP National Championship in May.

The 618 players who turned up to play in the event exceeded all expectations. It’s the second largest field for a WSOPC Main Event this season and shattered the mark of 352 players set in 2010. Twenty players resumed play for the start of Day 3 and inside of two levels the field was trimmed to ten.

The final table of ten players redrew and took their seats.

Danny Rohde was the first to make an exit. Rohde and three other players saw a flop of

. After the players in the blinds checked, Tuan Phan tossed in a bet of 300,000. Rohde shoved, holding

, and the players in the blinds got out of the way. Phan made the call quickly and tabled

and Rohde was in the lead, but at risk. Phan made his flush when the

hit on the turn, and after an inconsequential river, Rohde was eliminated.

Mike Devinsky was Phan’s next victim. Phan opened in early position and Devinsky three-bet shoved with pocket jacks from the big blind. Phan snap-called and tabled pocket queens, dominating Devinsky’s jacks. Phan hit a queen on the flop to put him further in the lead and Devinsky never improved, exiting in ninth place.

Only ten minutes later Denis Gnidash got in the way of the Phan train. Gnidash moved all-in preflop with

but Phan woke up with pocket sevens. The board fell in Phan’s favor when it rolled out

and Phan earned his third knockout with a full house.

The next elimination came courtesy of Manh Nguyen. Action folded to Nguyen who raised from the small blind. Kevin Kaikko, in the big blind, moved all-in, and Nguyen made the call. Kaikko tabled

, and was leading Nguyen’s

— until the flop. The flop fell

, putting Nguyen in the lead. Kaikko was drawing thin to retake the lead and the board finished

Only two hands later, Anthony Zinno was at risk. He raised to 300,000 preflop, leaving only about 100,000 behind. Phan, in the cutoff, reraised enough to put Zinno all-in. Zinno made the call and turned over pocket sixes, but Phan was running hot and had two overs, holding

Nguyen was eliminated in fifth place at the hands of Phan. Nguyen opened to 150,000 and Phan was the only player to make the call. The flop fell

, and Phan, who was in the small blind, announced that he was all-in. Nguyen made the call instantly and turned over

and needed some help to add another elimination to his repertoire. The

fell on the turn, providing no help to Phan, but the river brought the crucial

Fourth place finisher Larry Riggs, perhaps the tightest player at the final table, moved all-in from the big blind after Phan opened for 150,000 on the button. Phan called with pocket jacks and was securely in the lead against Riggs’ pocket fives. Riggs pleaded for a five from the dealer, but the board ran out

Marc Andre Roy and Phan played a decisive hand only a couple hands after Riggs’ elimination. Phan opened for 150,000 on the button and Roy called from the big blind. The flop came

and Roy check-called 150,000. Both players checked the

fell on the river. Roy checked, Phan bet 300,000 and Roy snap-shoved all-in. Phan called even faster and spiked his

on the table for a full house. Roy sat distraught, and turned over

before leaving the table.

Roy’s elimination left Hao Le and Tuan Phan heads-up for the title. The two were virtually even in chips for most of the match. The final hand came after about 45 minutes of heads-up play when Phan limped on the button and Le raised to 200,000. Phan called and the flop came

for trips and Le sighed as he turned over pocket aces. Le needed an ace on the river to stay alive but missed when the river brought the

The stacks were counted and Phan had Le just barely covered. Phan earned eight of the nine eliminations at the final table and seemed in control of the table the entire day.