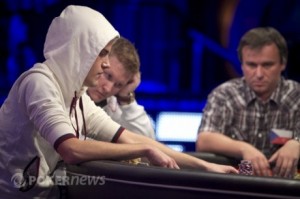 Day 2 of the World Series of Poker Circuit Harveys Lake Tahoe welcomed back 175 players on Sunday. The action was blistering, and after 14 levels, 11 players were left to bag up chips. Ron Segni, will come back for Day 3 on Monday with 892,000 — the chip lead.

Annie LePage was one of the shortest stacks coming into Day 2, and she took her ten-jack up against Matthew Weber’s pocket tens during the first level. That didn’t work out so well for LePage, who was followed right out the door by Gary "Debo34" DeBernardi, four-time Circuit champion Alexandru Masek, and the one-and-only JC Tran. Mark "P0ker H0" Kroon started the day with nearly 100BB, but he couldn’t make it to the first break before being parted from his stack.

This 2011 event contained nearly all of the players from the 2010 final table, and three of them made it to Day 2. Grant Hillman and Donna Jetter were sent off during the first few levels, though, leaving it up to Dan Black to represent last year’s class. He fared a bit better than the other two, but his run was cut short a few places shy of the money, ensuring an all-new final table and a fresh champion in Tahoe.

Well, it didn’t quite guarantee a fresh champion. Matt Keikoan has had good success in this building, winning the Main Event ring here in 2009. Day 2 was quite a challenge for Keikoan this time around, though, and his stack went from top to bottom and back to the top in a big yo-yo. He was all the way down to 42,000 within the first couple of levels, but he stayed the course and chipped his way back above average. Keikoan even had a chance to grab the chip lead on what would turn out to be his final hand of the event. In a huge three-way pot, he got his money in with pocket queens, running them smack into Segni’s pocket kings. With the board ran out blank, Keikoan’s 380,000 chips were not enough to keep him alive in the tournament.

As the field was whittled, the notables were weeded out, leaving with a group of relative unknowns. Perhaps the best known of them is David Clark, the champion of Event #1 here a last week. Clark was one of the more active players at the Day 2 tables, and it looked for a moment like he was going to be on the shortest stack returning to Day 3. But on the last hand of the day, he found a double to climb back into the middle of the pack. He bagged up 445,000, still below average but well within striking distance. He’s looking for his third gold ring.

Courtesy of that monster pot mentioned earlier, Segni found himself at the top of the chip counts at night’s end. The race behind him, though, is really heating up. Others wielding big stacks and nipping at the chip leader’s heels include Dennis Pevarnick (870,000), Hank Czarnecki (851,000), and Casey McCarrel (723,000).

The 11 players who’ve made it this far will be back inside Harveys on Monday to play to a winner, and we’ll be back ringside to bring you all the action.